A temporal disjuncture of sorts. 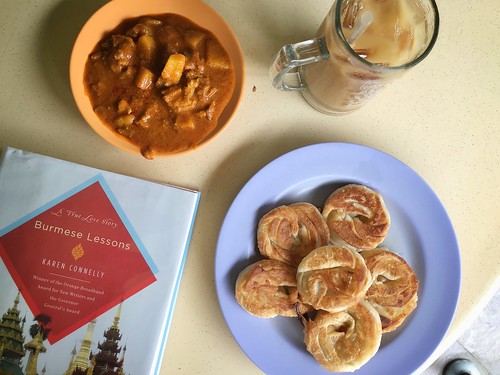 When I look up from the book I’m reading, while nibbling coin pratas (doused in spicy tender mutton curry) and sipping a teh si kosong ping, I am, for a brief moment, amazed to find myself Singapore coffeeshop under a HDB block in Sin Ming.

A week ago, this would have been a dark teahouse or streetside affair in Yangon, with a semolina cake and very thick sweet tea. The dusty air, swirled about in the afternoon heat by an old fan, would have been a delicate potpourri of cheerful cheroot, flaking thanka, juicy red betel nut chews, and exhaust fumes; of sandalwood, jasmine, rose.

It is strange to feel this way. Just a hint of that sour-bitter taste of leaving the people I loved in London to come to Singapore. But how could any part of this heart have been left in the Golden Land? True, it was easy to slip into local life there – the cheap, ubiquitous, delicious street food; the oases of teahouses; the pedestrian dance with slow-moving traffic; the clean derelict streets… But no real gospel partnerships were found. 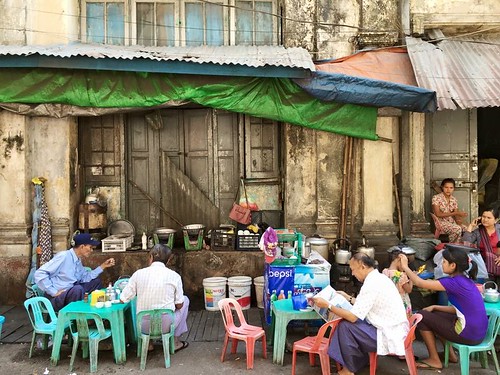 CC was both keen and cynical – the Judson translation was in Old Burmese and far too difficult for anyone to comprehend (LC agreed: “it’s like the KJV, in Latin”) so good secondary material was necessary, he thought. But so few of those were in Burmese. Yet, the situation was dire: Sunday school teachers were known to teach stories not even found in the Bible because that’s what they themselves had been taught. Meanwhile, Singaporean churches were arriving in Myanmar and throwing their money around, starting cycles of dire dependency and dangerously linking Christianity to material prosperity. Right doctrine, thought CC, was the way to go. – reformed doctrine, Westminster Confession etc.

LC, on the other hand, enthusiastic and well-intentioned, had an endearing way of sharing his life and his struggles, and was keen on social justice – visiting orphanages, feeding the poor in villages, fighting for the rights of those he perceived to be downtrodden. This was admirable and certainly love for neighbour in this sense must be one of the effects of the gospel in one’s life. However, not to the exclusion of and not divorced from even more important things: love for God and his word. LC had a risky loose way of speaking about things: “you are blessed” he said when I made it to the airport in time despite Monday morning traffic (so would I be “cursed” if i suffered the natural consequences of my procrastination?), “God told me/him/her” he explained, admiringly, as the reason why people arrived/left Myanmar sometimes just on the basis of someone’s dream, etc. And when I pointed out that his church was using “salvation”, “healing”, and “wellness” interchangeably, he got annoyed and said that I should not bring intellectual Singaporean standards to Myanmar. 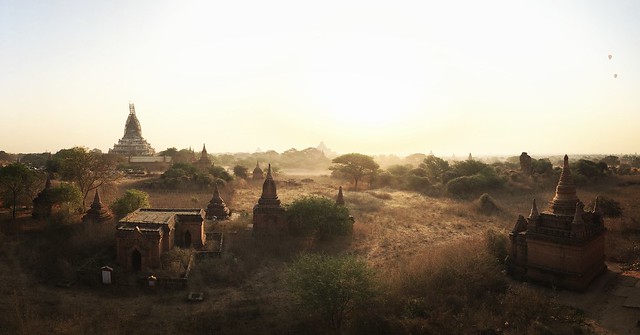 But if we do not speak according to God’s word, there will be no light of dawn.

Attention to God’s word is necessary because it is our only authoritative communication from God – by his Scripture, God speaks to us and tells us of himself and his plan for the world, of our dire situation, of his Son’s saving work and future universal reign. And by God’s word, God works – his transforming powerful word does not return empty but accomplishes his mission of uniting all things under Christ.

God’s word is sufficient as the means by which we can have knowledge about salvation and knowledge about how to live godly lives. One shouldn’t admire the occurrence of random doubtful dreams and prophecies, but rather praise God for the miraculous ability of Christians to now live lives pleasing to God, putting to death our sins.

And God’s word is clear. God has not left his word to modern intellectuals; he gave his word to people in many places and many times – they were kings and court officials, and also peasants and fishermen, and the uneducated and the orphans, and he expected that they would understand and obey. But we do have to do the hard work of understanding it, just as we would a textbook or a legal document. And the Bible is far more important!

Perhaps this heartache is for hungry goats without a goatherd who will beat the trees of leaves and feed and nourish them. Yet, I take heart that God is the ultimate provider, and will be praying for these dear brothers and for Myanmar for quite some time to come it seems.