Popped into 99 Beach Road, where SingaPlural 2015 was being held, for a session on Architecture appreciation. 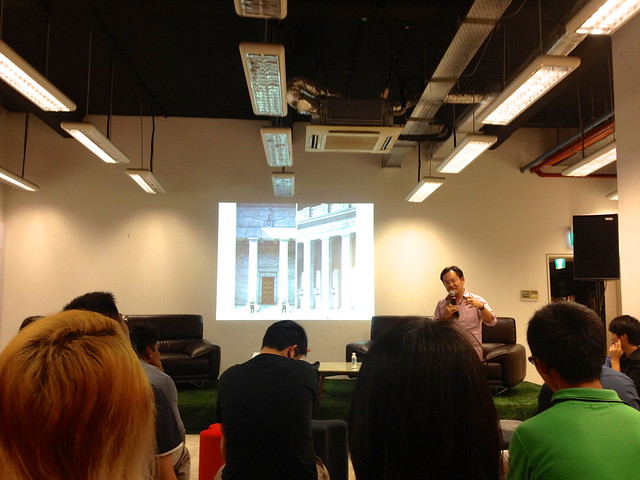 The speaker gave the same pointers about appreciating buildings as this article:

Having just done a training session on Bible reading that morning, I was amused how most things in the world can only be appreciated when one understands the various contexts in which these things were placed (literature, art, science, music, philosophy, politics, Scripture, etc).

What made the presentation more useful than just reading the article off the screen were the visuals put up by the speaker as he talked through the relevant aesthetic features.

Sense of scale
Albert Speer’s Reich Chancellery that he knocked up for Hitler in just a year was designed to make people feel small, but somehow cause the short Adolf to loom larger than life. The not-for-human scale at St. Peter’s Basilica was to induce another kind of worship – that of God.

In contrast, the human-scale repetitive architecture in Haji Lane in Singapore, and Laneway in Melbourne, give a feeling of warmth and cosiness.

While Peter Zumthor’s Haldenstein, in concrete and neutral colours showcase the nature outside and exert a calming effect, which, the speaker said expressed itself in his work. (I suppose it is a bit of a chicken-and-egg thing since arguably, he could have designed his own house to suit his character, so it wouldn’t necessarily be the house itself influencing his work…)

The Details
The little details in Carlo Scarpa’s Fondazione Querini-Stampala – the shape of the doors, the flow of the water – were beautifully proportioned. Oh look at those “floating stairs” in the Olivetti headquarters: