I loved how much Hong Kong was like the set of Blade Runner, with its plethora of neon signs filling the space above the streets. 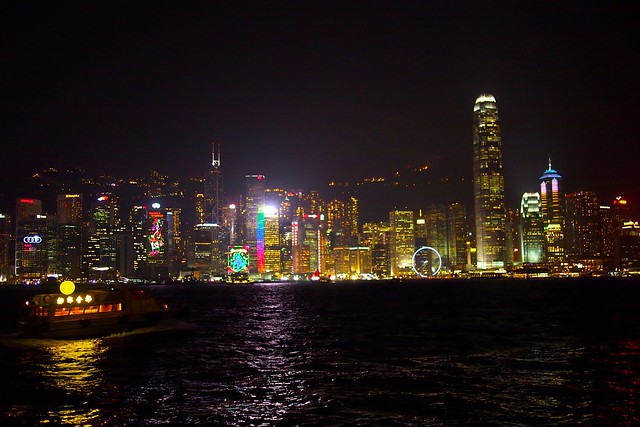 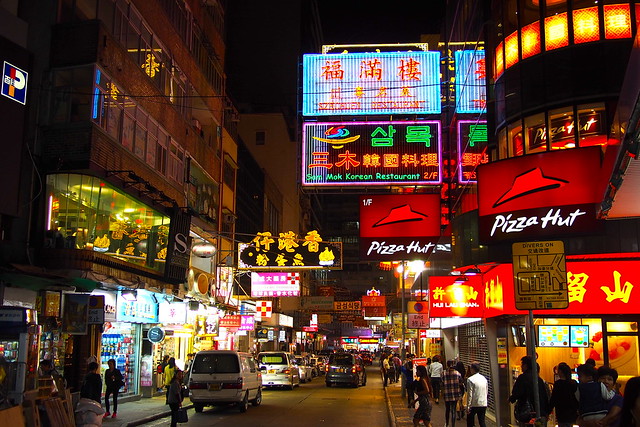 Residential flats in Kowloon too spoke of the economy of air space. Nothing was wasted for something as unprofitable as a balcony: 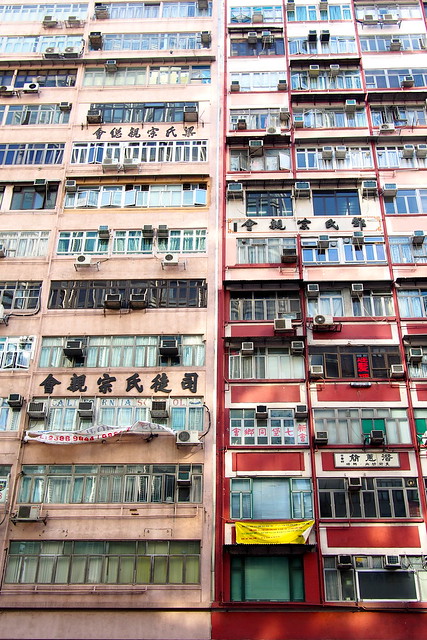 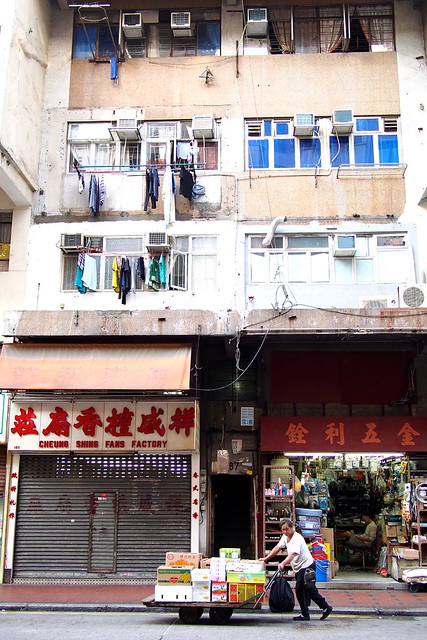 On the ground, shops were sub-sub-sub-divided so as to spawn tiny lots crammed with goods and tools of trade: 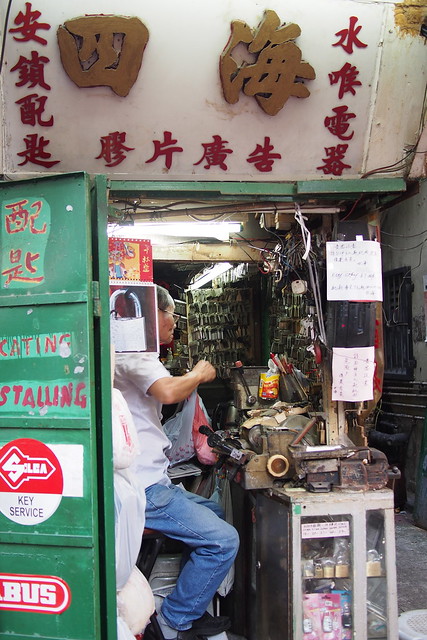 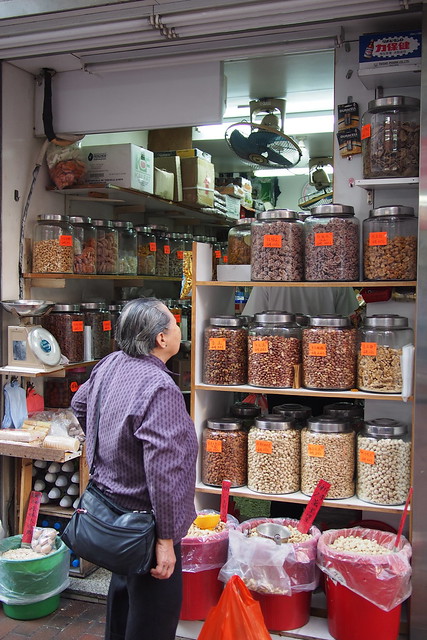 in markets, boxes and sacks of dried meat and vegetables and mushrooms and noodles, unable to be confined to the shop, spilled out onto the corridors: 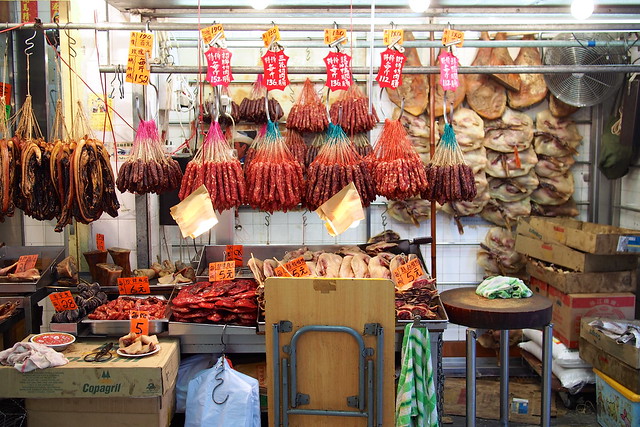 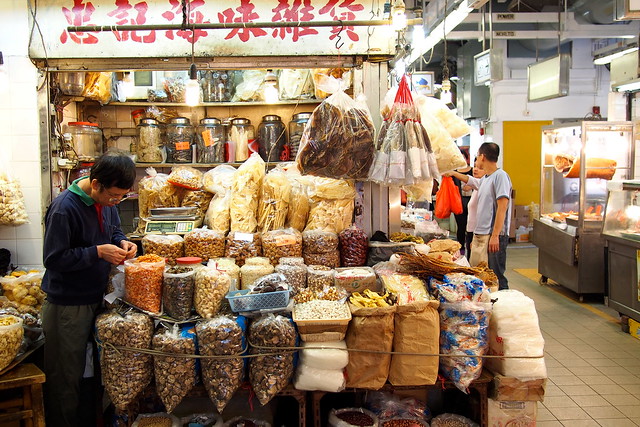 It was as if empty space abhored a vacuum and any unused surface, even a door, quickly attracted posters of every description and size and colour: 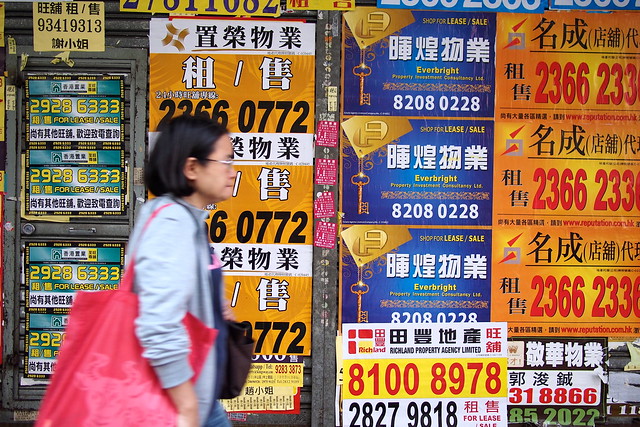 On the streets, signs, not content to be in one language, were bilingual, making even empty streets look busy: 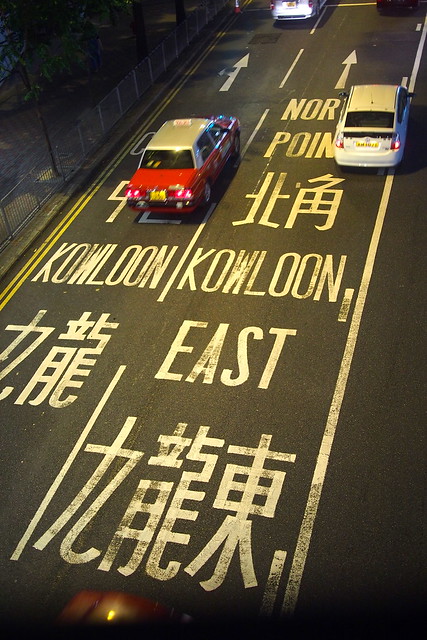 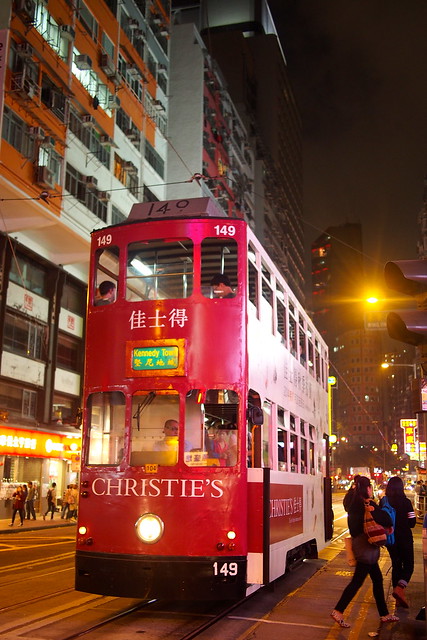 Everywhere, the hustle and bustle and noise and mass of goods clamouring for attention: 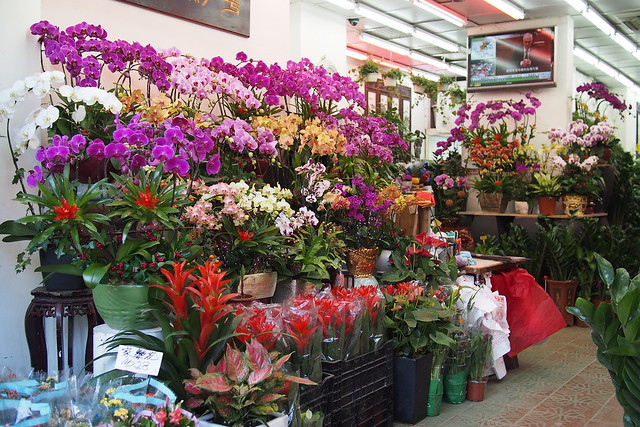 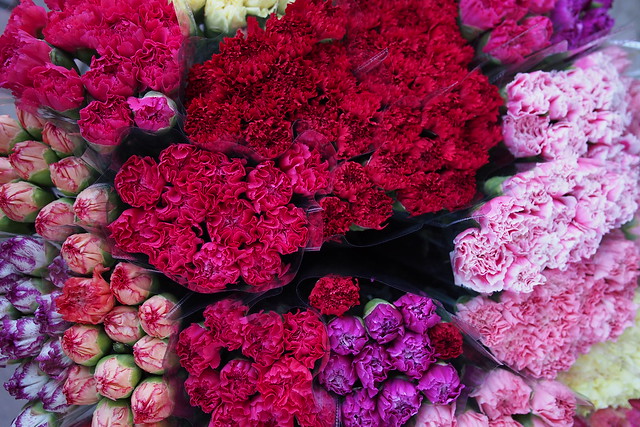 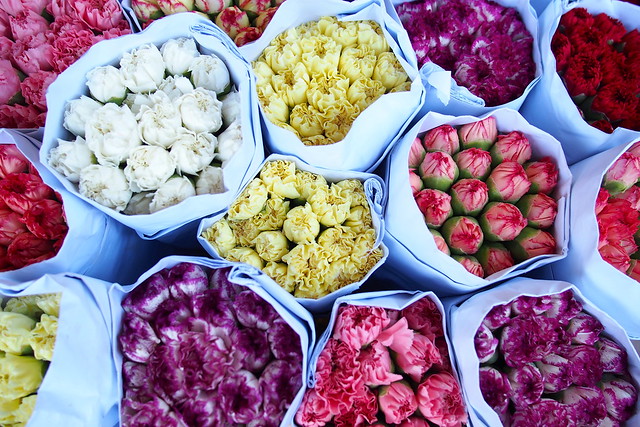 in the flower market, 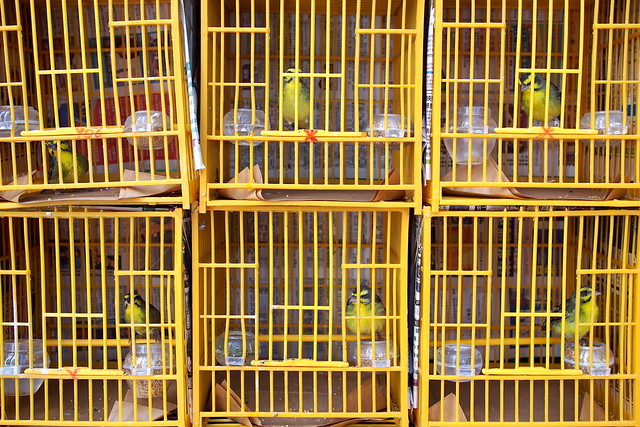 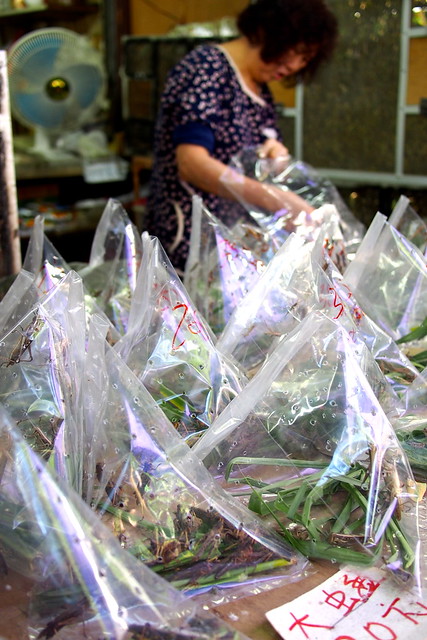 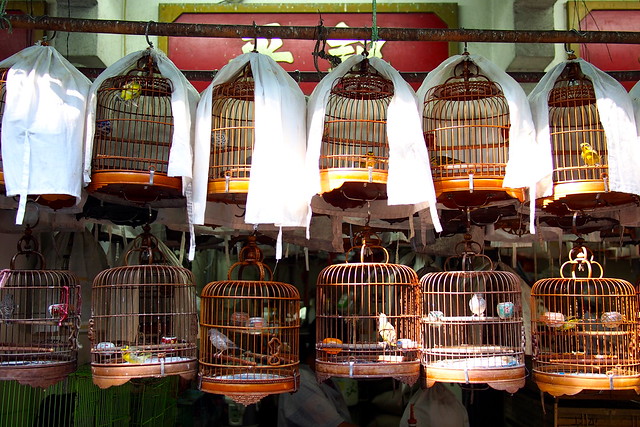 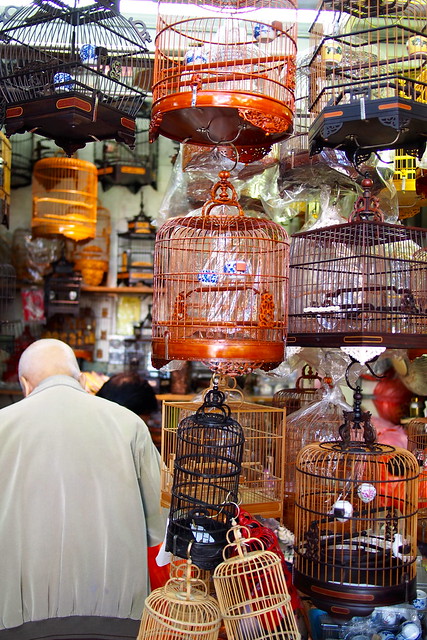 And Hong Kong seemed authentic, in the sense that none of these markets existed mainly for the benefit of tourists. In fact, one of the bird shop owners stood outside his shop defensively, stick in hand, once a tour-bus of French people descended, using it to tap away professed animal-lovers who were simultaneously commenting on the sad lives of caged feathered beings, and shocking the same poor birds with their camera flashes.

But perhaps there was a different sort of inauthenticity, said some commentators, with reference to the Occupy Hong Kong or Umbrella Revolution. This was the latest in one-upmanship, they said. Ever since the beginning of human society, everyone has desired to show how much better they are than everyone else. A few decades ago, you trumped others with branded clothes and expensive goods. But that has since become quite vulgar. Later, animal rights and human rights advocacy were how you demonstrated your (moral) superiority. Presently it seems, political martyrdom is the thing. If the good of society was the underlying reason, there might have been a better way of being heard and changes being made without a whole lot of inconvenience to everyone else (money lost, commuters who have to deal with congestion, police who have to work long hours), but where’s the self-glory in that? Better to get world recognition and the pats on the back, than to be an anonymous contributer to the improvement of the common good.

I met some Hong Kong students on my travels who were jealous that their friends had been able to rush home to be “part of history”. (Full details, photos, vidz, were on social media, with many “Like”s.) When asked what this “full democracy” was that they wanted, they admitted they didn’t know the details.

It was difficult for me to comprehend how one could agitate for something unknown. Lemmings come to mind. Thought these questions were worth asking:

But the Hong Kong students grew defensive,”This is the only chance we’ve got! We need to show them!” But what exactly do you want to show them? 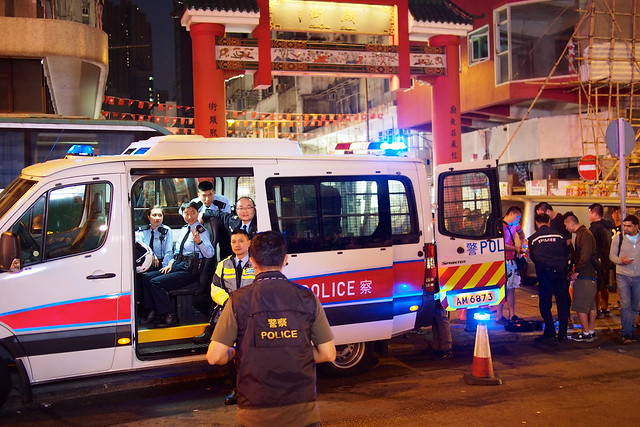 not real policemen; actors taking a break from filming

I wondered if one’s position on the social ladder was now determined in terms of how much one could boast of one’s anti-authoritarianism. If the official position was capitalism, then socialism or communism would agitated for, and vice versa. Nothing at all praise-worthy about that.

And meanwhile, the camps themselves became quite the tourist attraction, many visitors taking selfies/wefies with empty tents. Protest Theme Park in the offing?: 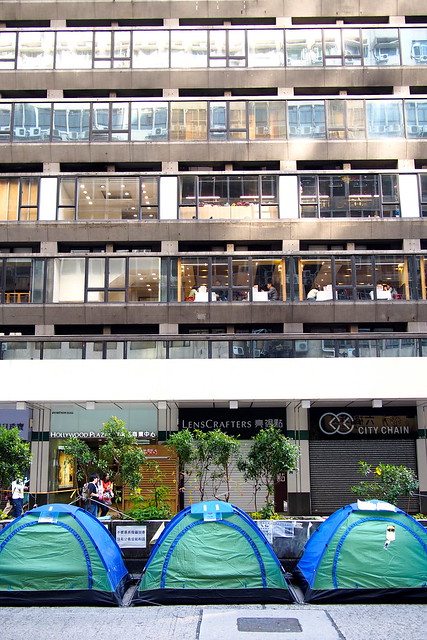 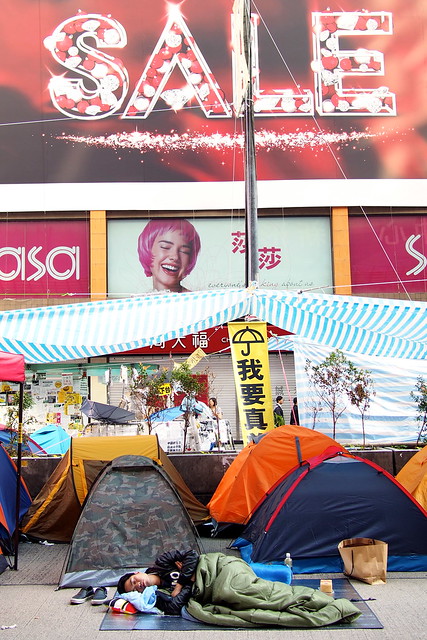 Past the protest camps, Tim Ho Wan in Mongkok was quiet when we arrived. We were ushered to a table immediately and made quick work of the concise menu: 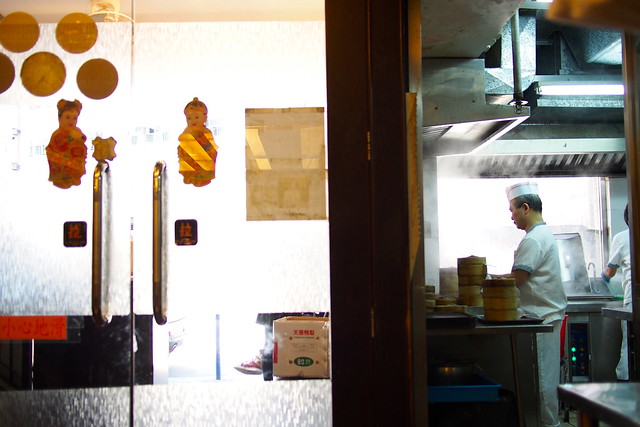 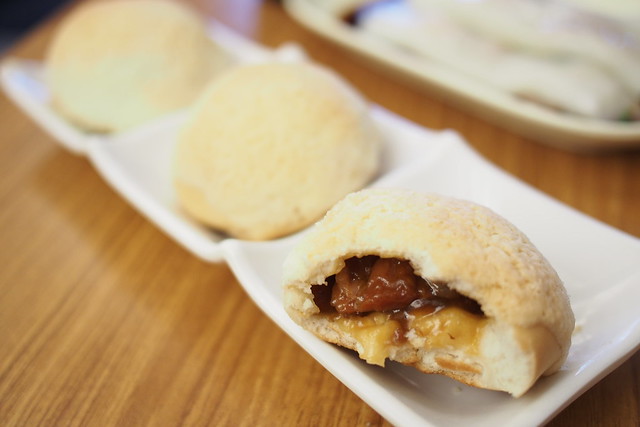 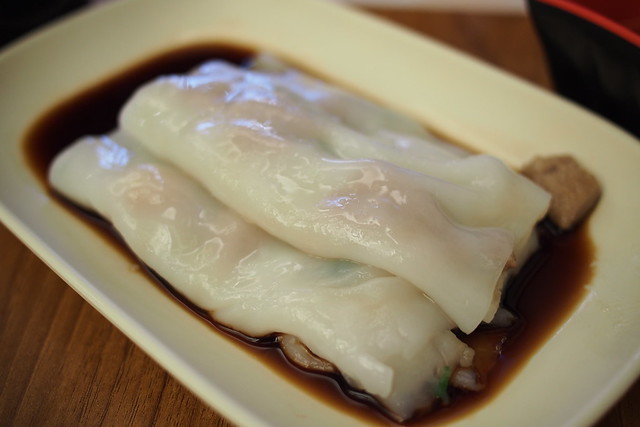 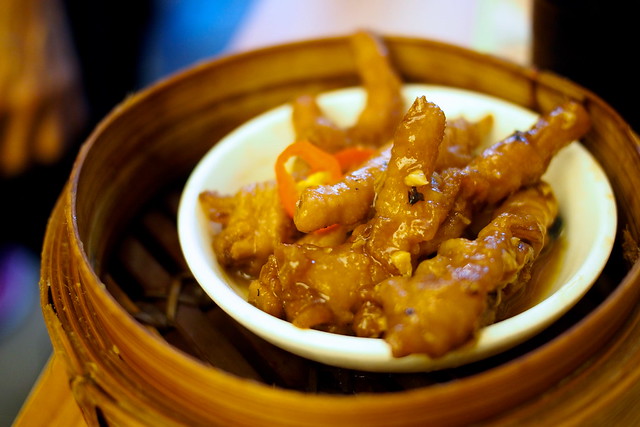 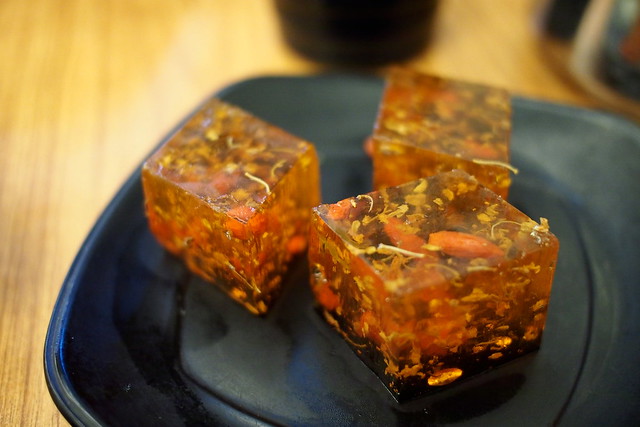 “Do you think some of the protestors might come to this one Michelin star restaurant for dim sum?”

Why not, I thought. It would only seem incongruous because modern society has somehow conflated authenticity with anti-authoritarianism, anti-capitalism and being on a lower tax-payer scale. So even if yum cha at Tim Ho Wan was affordable generally, patronising a place mentioned in the Michelin Guide would have smacked of selling out to an Institution. Uncomfortable with the lack of clarity of thought.

Surely there is no inherent virtue in either eating one’s dinner in one’s crowded workplace: 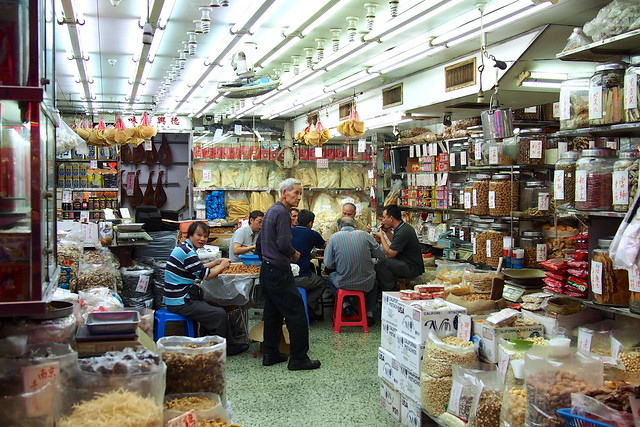 instead of on the balcony of an apartment on The Peak, with a clear view of the city: 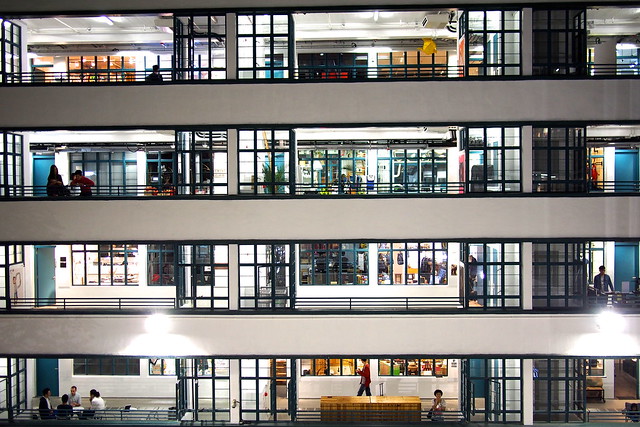 instead of, say, on a Geisha brew: 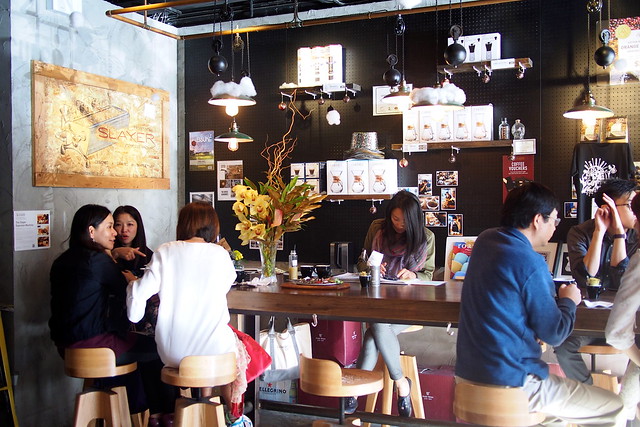 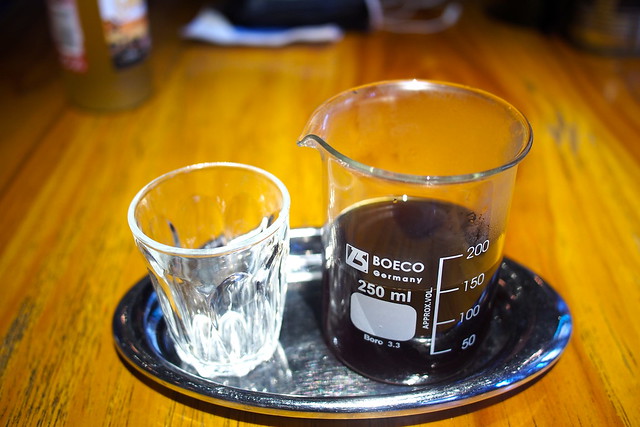 No. And perhaps they are equally inauthentic, for

all have sinned and fall short of the glory of God (Romans 3:23)

PS: if anyone was looking for an English-speaking church in Hong Kong, I’d recommend Ambassador International Church Hong Kong – observed John Percival to be a faithful preacher.