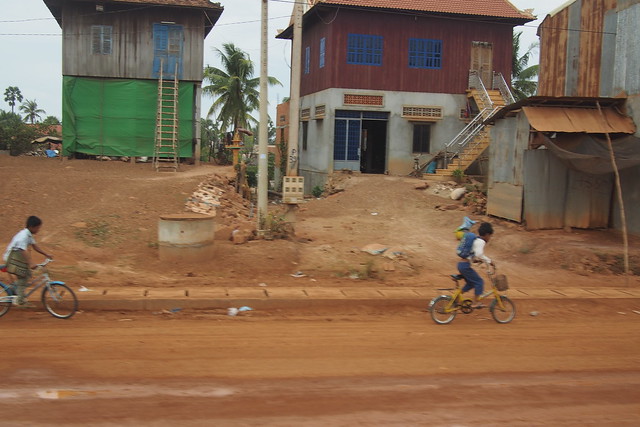 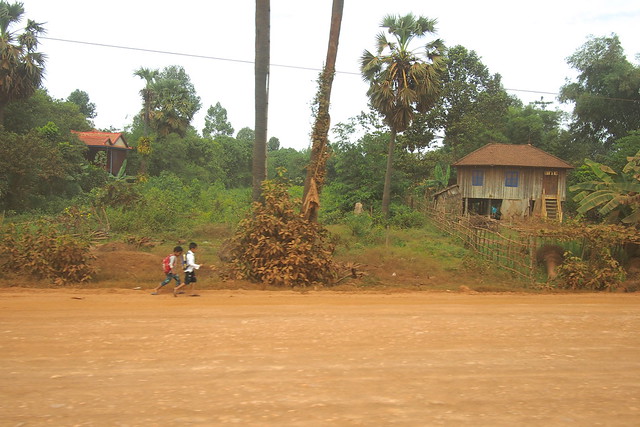 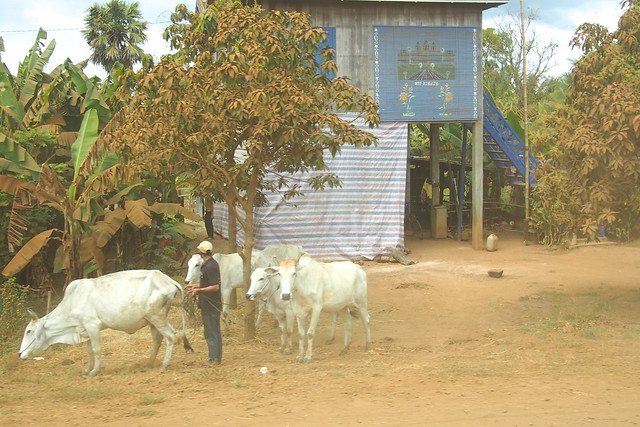 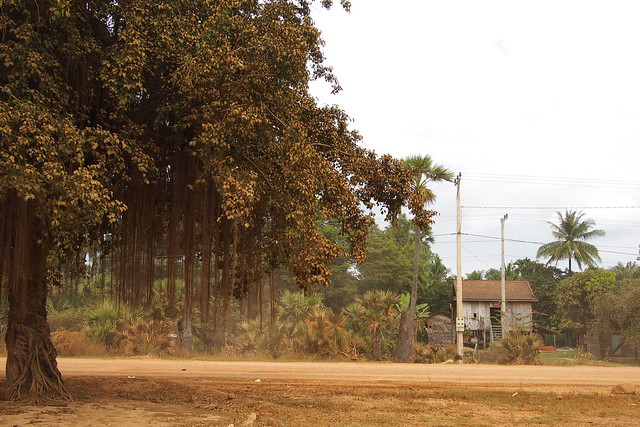 Boarded the Giant Ibis again to get from Phnom Penh to Cambodia. The bus was much older this time, and crowded. The infrastructure in Cambodia not being as well-developed as Vietnam meant we were treated to the sight of things covered in fine red dust as the vehicles on the “national highway” whizzed along, bumping on rocks and into potholes. 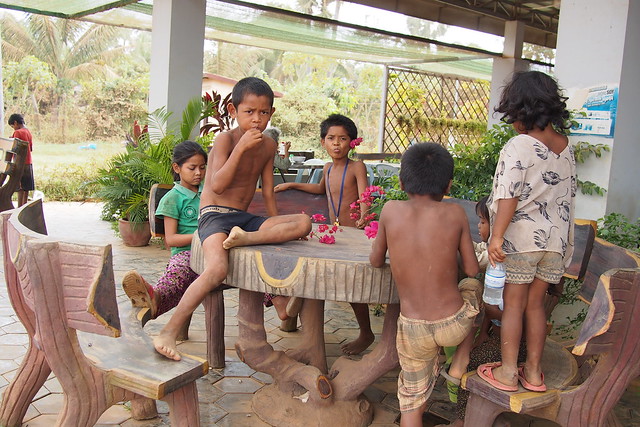 We stopped at a roadside hut for lunch and these kids ran up. They waited at the door of the bus and peered at us as we ate. You could almost hear the Western consciences groaning under the weight of their stares. “Don’t give them money; don’t give them anything,” warned the waitstaff. Apparently, tourist money and other free stuff led to their parents pulling them from school. What use was learning if handouts were so easy? And why bother with dull drills when they could have fun and as much candy as they could manage to wheedle off people? But some gave anyway, so they wouldn’t feel so bad. 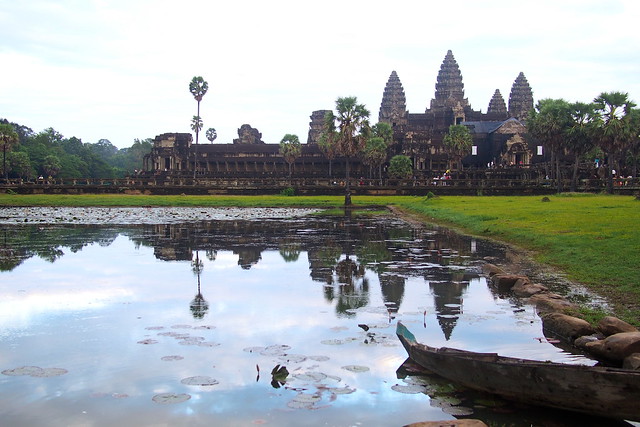 Wanted to make a quick stop at Angkor Wat and friends again (after a decade!) before heading down to Thailand, so hired a tuk-tuk first thing the next morning to take me round. While I could navigate the place from memory, what threw me off were the hordes of visitors. 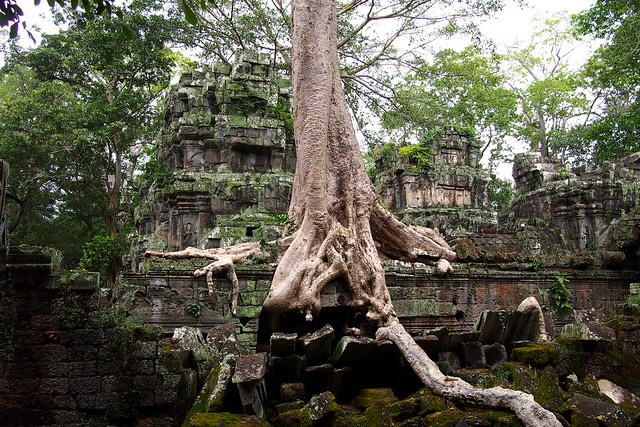 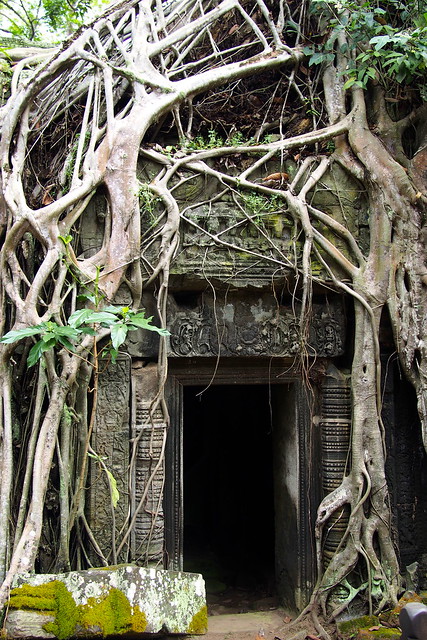 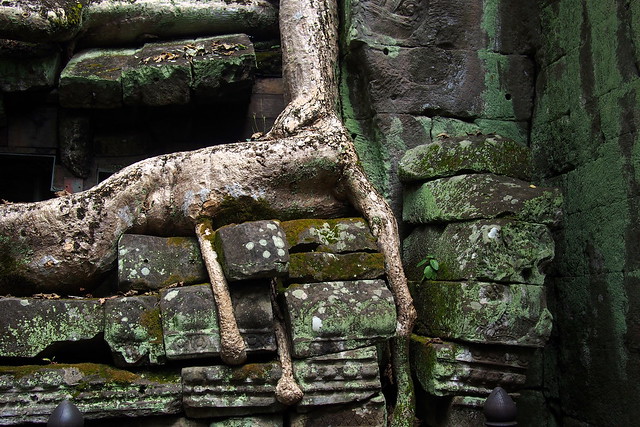 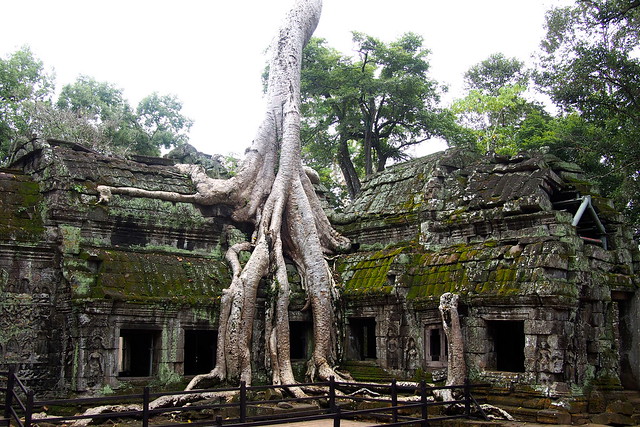 They seemed like the insidious roots of trees, getting into every crack, tearing apart buildings in their enthusiasm, as they pushed and pulled at the ancient moss-covered bricks. 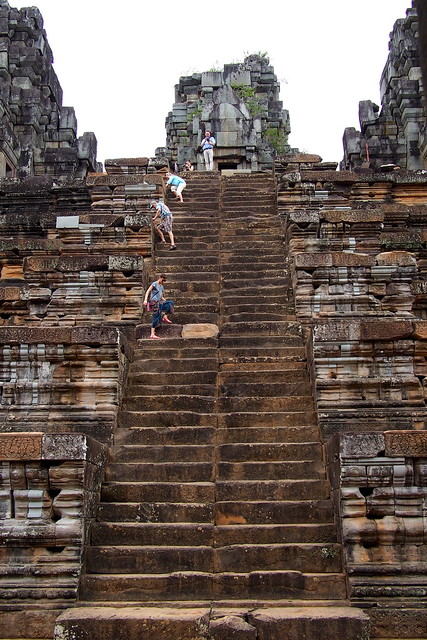 Previously, I’d climbed the old temples alone, the only sound that of cicadas and my pounding heart, afraid that if I fell, no one would find my crumpled body. Now, I’d be lucky not to be trampled to death. 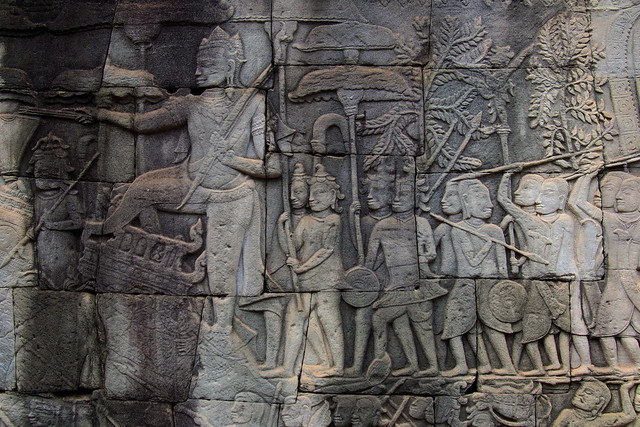 Power struggles in the modern day are of a different breed altogether: not by might but by the elusive authenticity again, it seems.

In my read-through, Andrew Potter now turns to authenticity within politics in The Authenticity Hoax: Vote For Me, I’m Authentic: 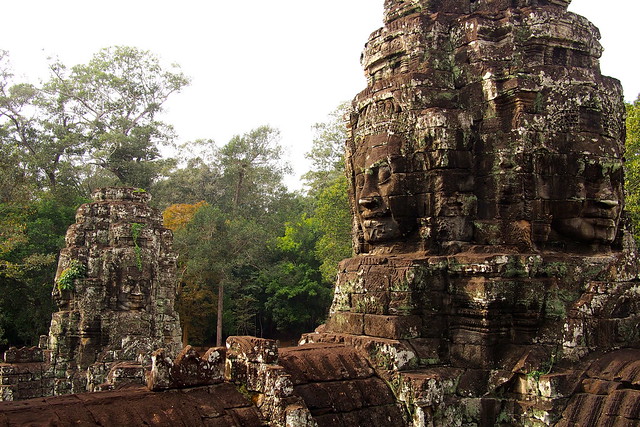 Television altered politics first by making the politician’s appearance and ability to perform in front of the camera their most important quality. Television also brought money into politics because now there was the need for lots of it to pay for television advertisements. What television thrives on is conflict so it is “no wonder then that politics in the age of television consists almost entirely of heavily scripted events that offer little more than prepared statements, canned responses, and memorised talking points”.

Now the internet has led to a fundamental transformation of journalism itself so that anyone is an “insta-pundit” and anyone with a mobile phone can report “live” from the scene. Guy Debord calls this The Society of the Spectacle. “Building on Marx’s theory of commodity fetishism, Debord argued that the trajectory of modern society is characterised by a shift from an authentic and active lived reality to an alienated existence that is mediated by images, representations, and passive consumption…social relationship between people mediated by images”. 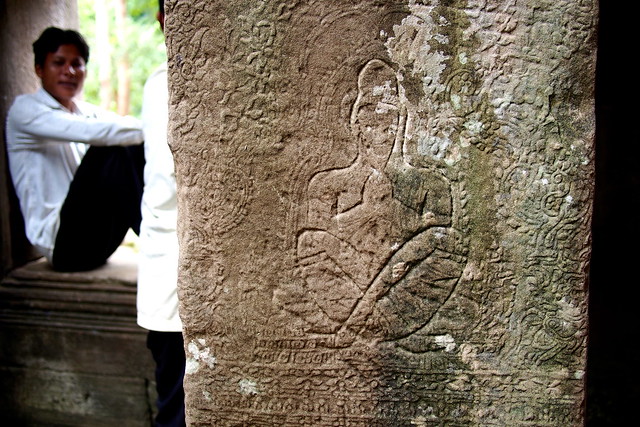 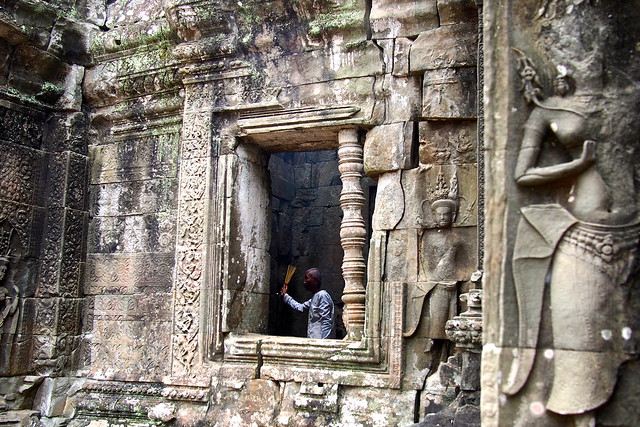 In addition, the irony, says Potter, is that “we say we want to see the real person behind the mask…we say we want spontaneity and real emotion…we say we want to be able to choose from parties and policies that accord with our beliefs and values, but when presented with all these, react with revulsion.

In actual fact, the authenticity we claim to desire must mirror our own narrow values and ideals. This is the “reason politicians hire image consultants and stick doggedly to their talking points…”spontaneity and frank talk is punished far more frequently than it is rewarded…political leaders are trying to appeal to as many people as possible without turning anyone off. Worse they have the additional burden of trying to do it under the omnipresent and omni-hostile gaze of a media that will rip them apart at the slightest misstep”.

And such media runs on controversy and scandal, eschewing the important issues of policy to pounce on anything that might sell copy put doubt on someone’s authenticity. [Comment: but there is no supply without demand, so it is the public who are to blame, surely?]

And even without the media, because authenticity is such a purportedly-valued characteristic in a political leader, negative advertising (character assassination, casting doubt on the moral valence of a candidate) will do the job.

“…this puts politics in a death spiral. A fixation on authenticity and a candidate’s character creates an opening for attack ads by the opposition. But this in turn gives a candidate an incentive to lie about his past or hide his true character, which provides jobs for all the spin doctors and image consultants whom nobody likes. In the end…it isn’t the spin doctors who have drained the authenticity from politics; rather, it is the desire for authenticity that provides opportunities for men who can help you fake it. The only alternative is to vote only for candidates who are so upright, honest, and unimpeachably dull that you wouldn’t want them having supper with you, let alone running the country.” 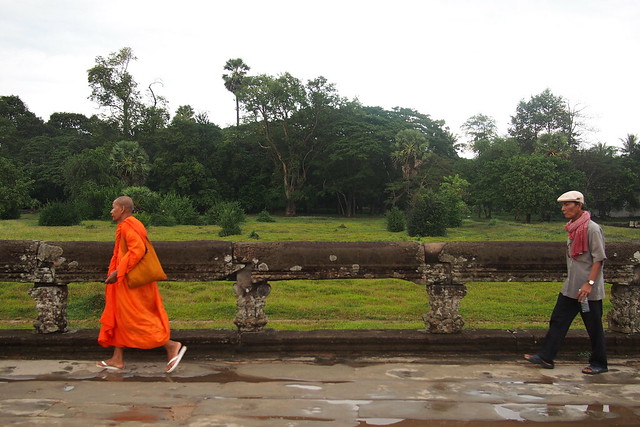 And as for how “politics seems more and more a branch of marketing, with parties and leaders packaged and sold using the same techniques used to sell energy drinks, NBA players, and everything in between”, Potter argues in his usual manner that “the selling of politics does not undermine democracy, it enhances it, and the branding of political parties and leaders is not a tool for manipulating voters, but a mechanism for enabling democratic participation…[because] most people don’t have the time or frankly, the ability to properly digest budgets, policy documents, or drafts of new bills, and the distillation of the stupendous complexities of the modern state to a handful of simple but distinct brands is not just useful, but necessary”. 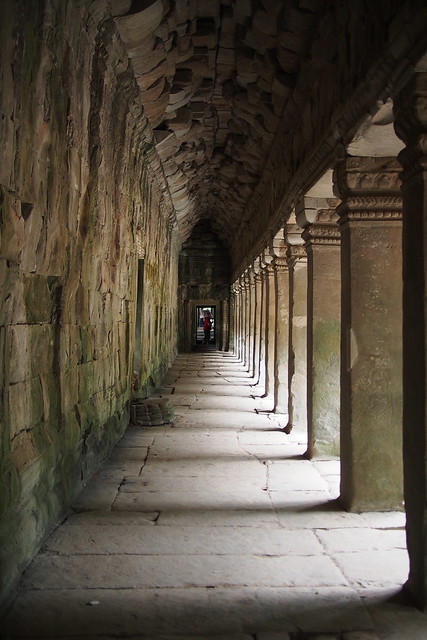 However, in the previous chapter, Potter’d already mentioned Andrew Keen and Cass Sunstein’s assessments of how undemocratic the internet is. And if “democracy is based on the premise that reasonable people can disagree over issues of fundamental importance, from abortion and gay rights to the proper balance of freedom and security. When the mere fact that someone supports the other side becomes evidence that they have been brainwashed, then the truth is you no longer believe in democracy”. 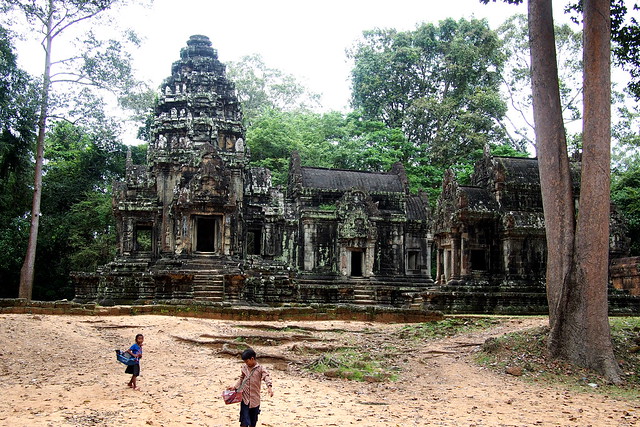 “You buy my postcard…one dollah!” cried the little boy as he followed me around. Because I had in my mind the monks that might have lived here previously, perhaps meditating or deciphering a palimpsest, I couldn’t help but giggle at the incongruity. And the two children started laughing as well. “Haha!” said the boy quoting himself,””Buy my postcard one dollah”…hahahaha!” as he chased the girl amongst the old stones 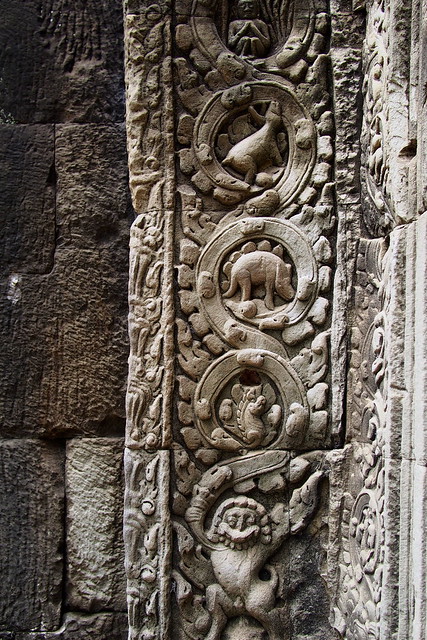 wait, a stegosaurus? or did a rookie stonecarver try and fail to do an iguana justice?

On the topic of dinosaurs, a really good example of unreasoned ignorant echo-chamber hatred on the internet is the time Steven Spielberg’s photo with an apparently deceased triceratops went viral, with people accusing him of violating animal rights etc.

And on the topic of internet hate, this New York Times article on Justine Sacco has been making the rounds. Most of the “lessons learnt” comments though, are not about circumspection in judging someone negatively or refraining from indulging in mob violence, but on ensuring one does not get on the bad side of the fickle crowd… 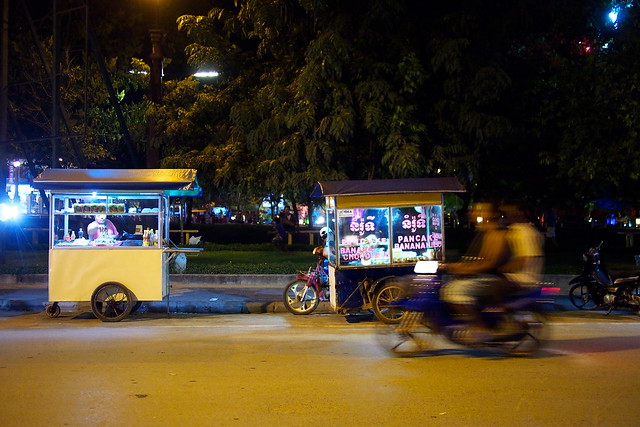 The street food didn’t look very fresh in Siem Reap, so, instead of doing the usual Pub Street routine, decided to splash out a little on Khmer restaurants instead: 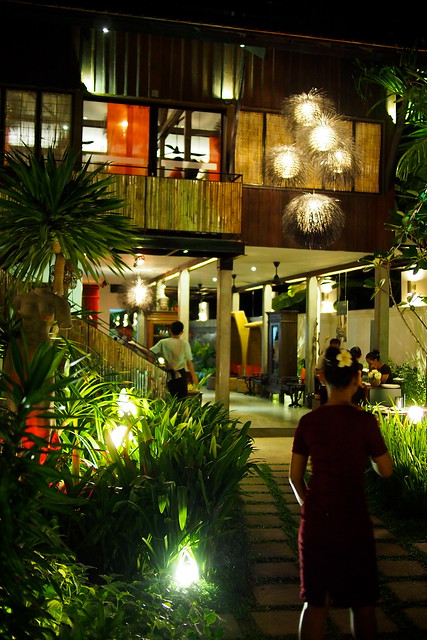 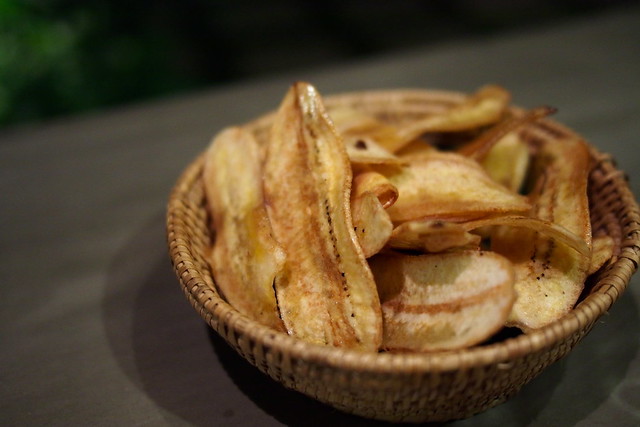 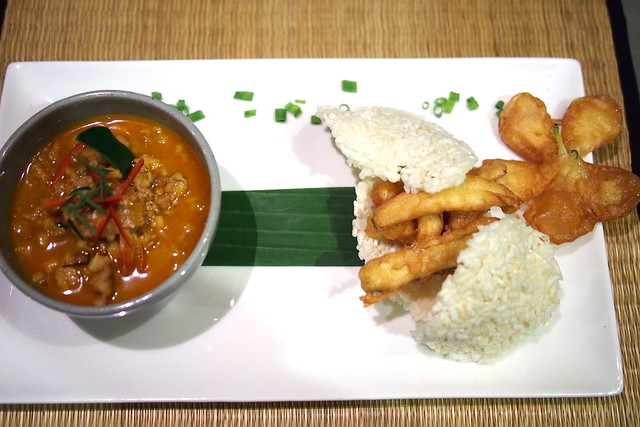 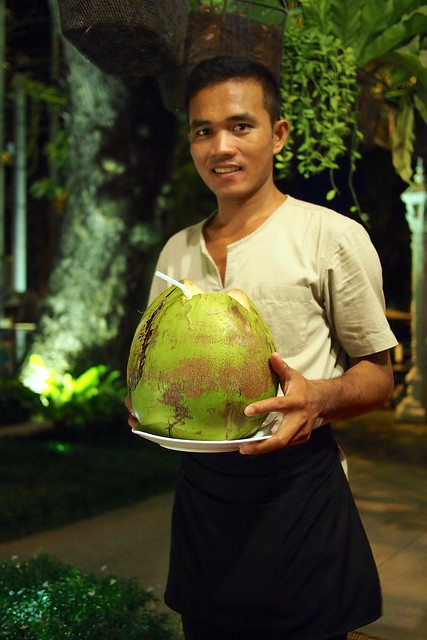 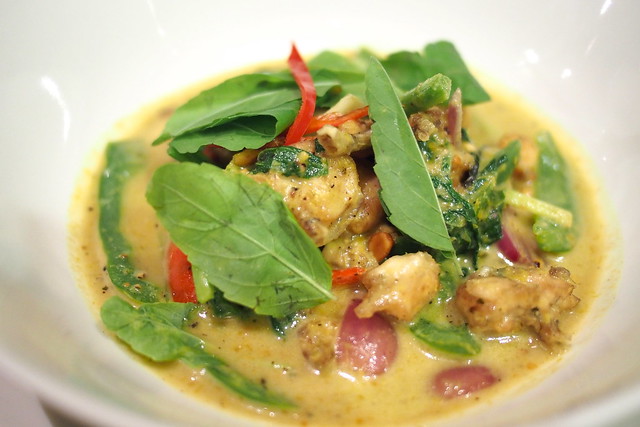 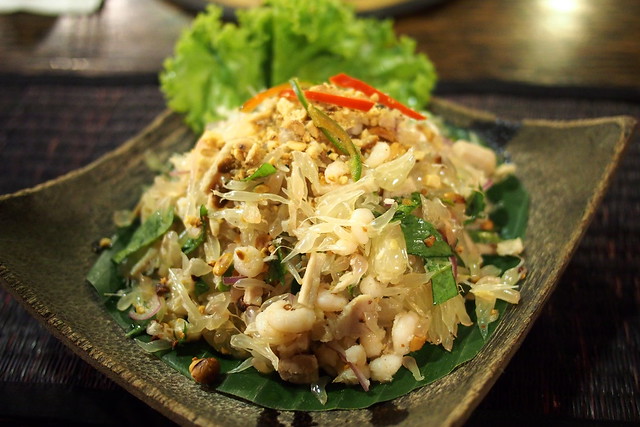 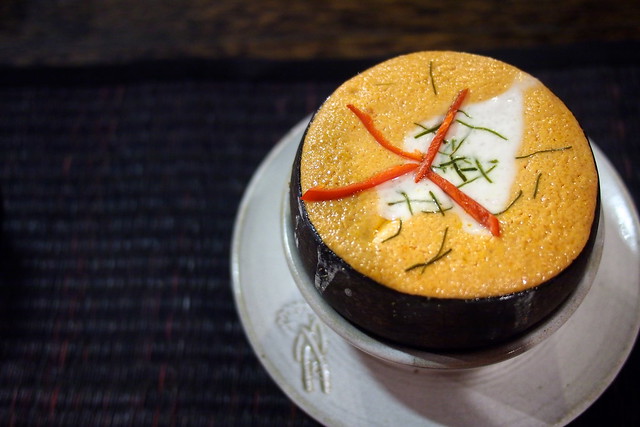