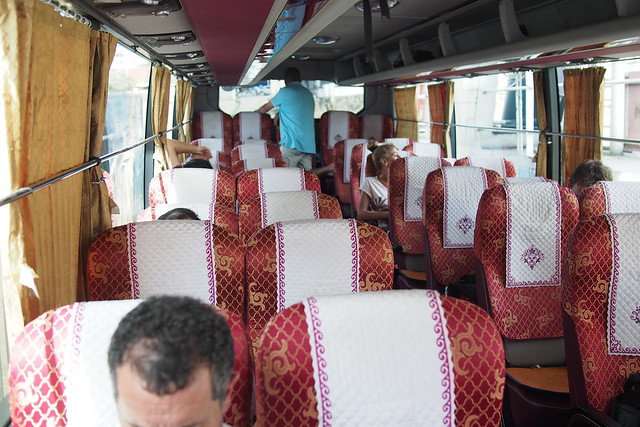 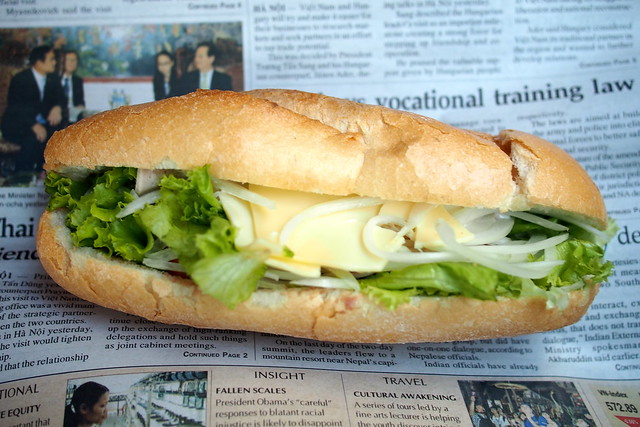 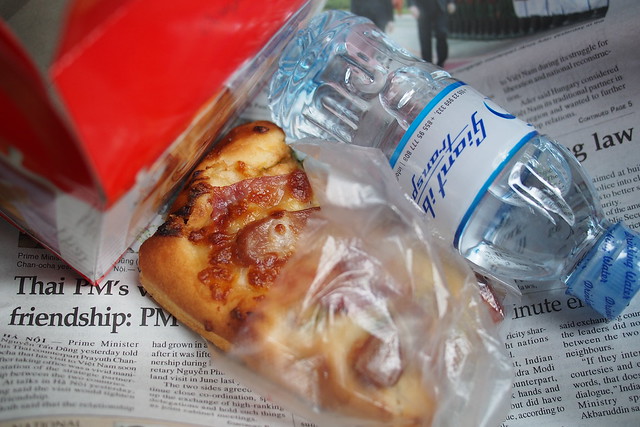 Walked to the Giant Ibis coach office in Siem Reap, waved along by some older Vietnamese ladies who were sitting on the street having a yabber. It was a fairly empty coach for a Saturday. I’d brought a banh mi for brekkie and there was complimentary water and a pizza snack. 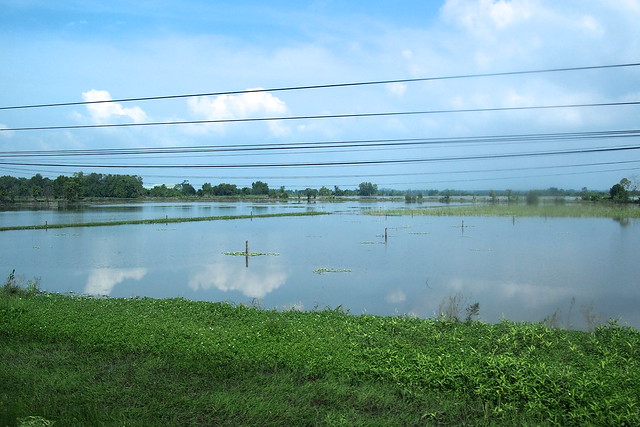 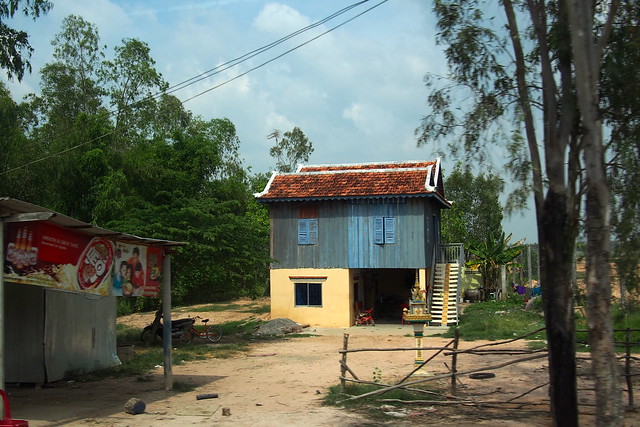 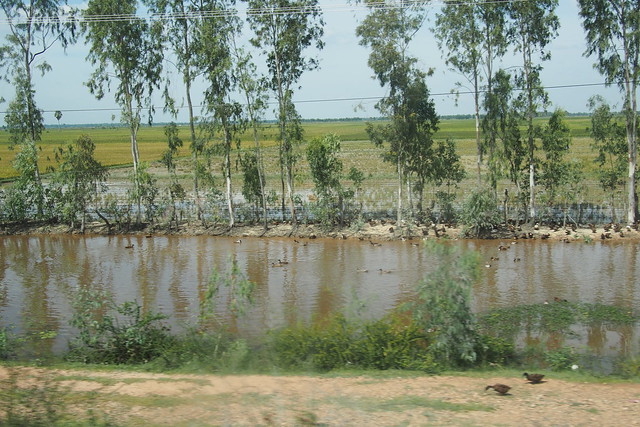 Enjoyed the buccolic scenery. After we crossed the border, artificially man-made as it was, we started to come upon duck ponds and houses on stilts (with the bottom bit filled in, in some cases) and spirit houses. 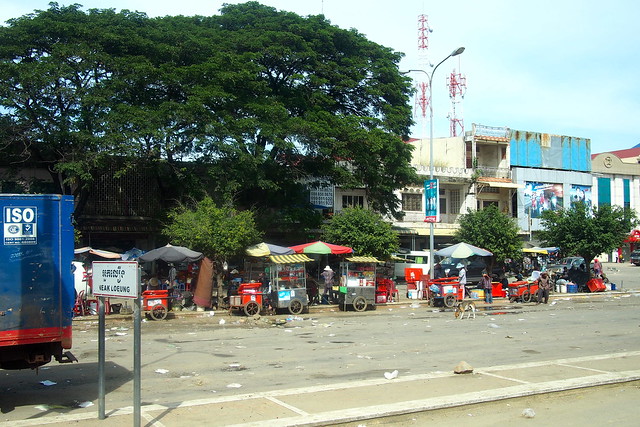 This place looked mighty familiar. Then I realised we were in Neak Loeung where I’d stayed in many years ago! The shops and markets were exactly where I’d left them. A comfort. 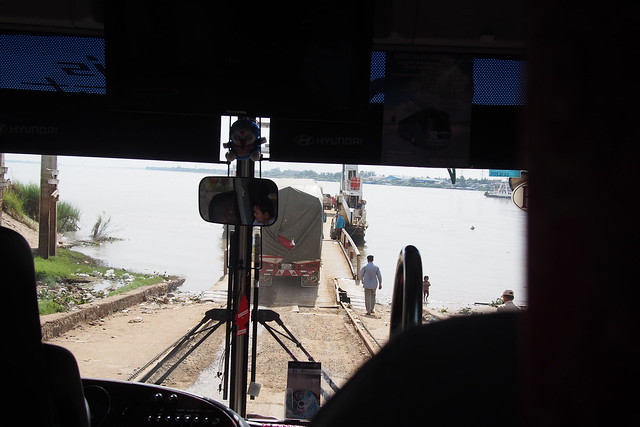 Then the entire coach followed several heavy vehicles onto a ferry to cross the Mekong. Motos and assorted vehicles milled about. 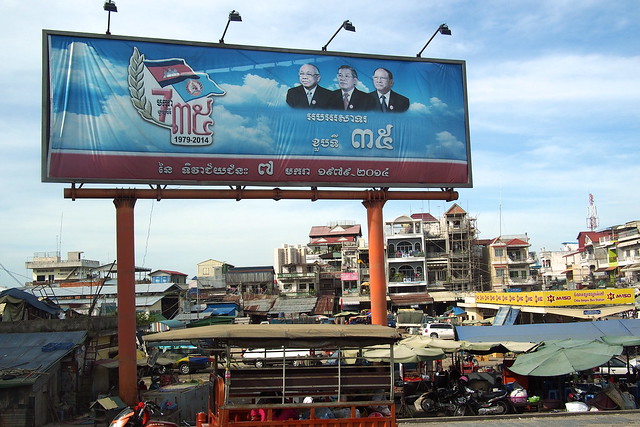 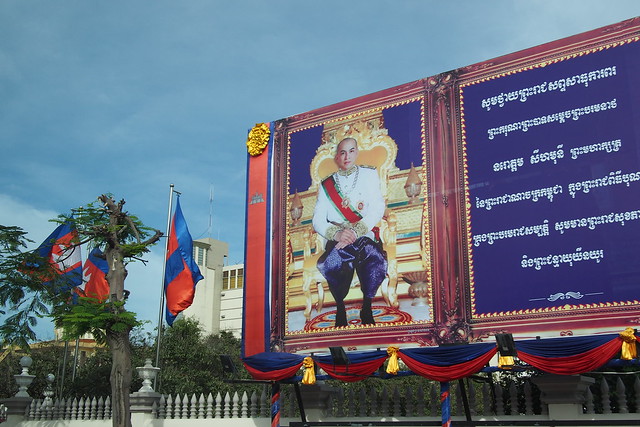 When we started seeing boards of these three guys at ever-increasing intervals, and then of the Cambodian King Norodom Sihamoni (នរោត្តម សីហមុនី), we knew we were near the Cambodian capital, Phnom Penh. “King Sihamoni gay” prompts Google when I type in the name of the former ballet dance instructor. Why would his sexual preferences be of interest to anyone, more than say, his political or philosophical preferences?

Yet, it is a question that none of us would think twice about asking in this day and age. 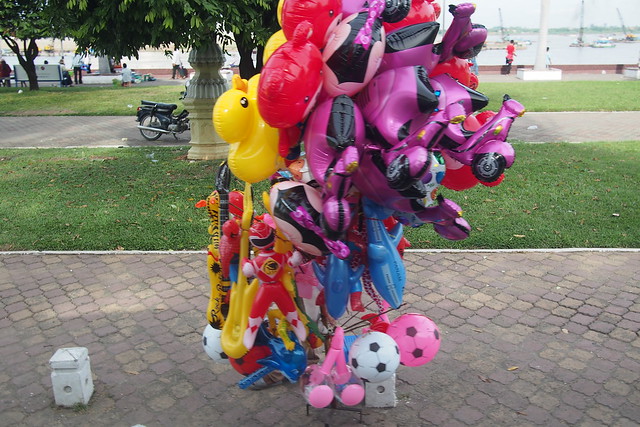 Didn’t think Andrew Potter’s chapter, The Authenticity Hoax: Perils of Transparency, had a terribly cohesive structure, and his conclusions seemed a little slap-dash. But he does identify viewpoints to be looking at issues from:

“Recognising that authenticity is a positional good with a built-in self-radicalising dynamic helps us make sense of a lot of the seemingly bizarre behaviour that manifests itself as authenticity-seeking. The fetish for the public display of emotion, which exploded into our popular culture with the death of Princess Diana and whose embers are tended by Oprah Winfrey’s cult of self-obsessed sentimentality, can be understood as a form of radically conspicuous authenticity.” “The Oprah Winfrey brand is built around a cult of authenticity through therapeutic self-disclosure, of the sort promoted by her frequent guest Dr. Phil.” 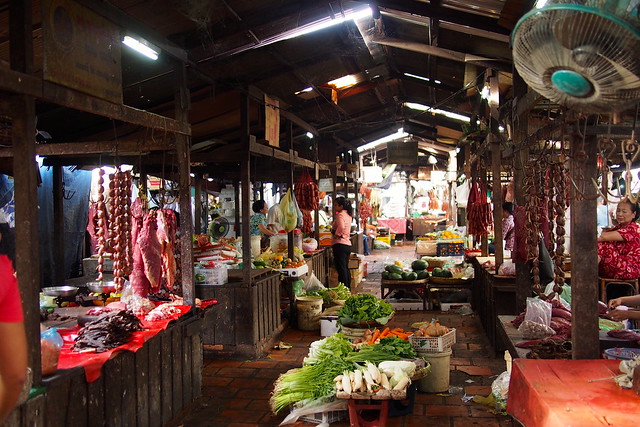 Andrew Potter goes on to dissect the James Frey A Million Little Pieces incident where Frey was found to have invented events in his memoir “in order to serve what [he] felt was the greater purpose of the book”. Oprah agreed with this saying that what impressed her was the “underlying and universal message of redemption at the heart of Frey’s tale”. The Oprah-ian world embraces the Rousseau-ian ideal that feelings are the touchstone of authenticity, not historically accurate facts. So it was odd that there was such a furore over his confession of fictionalising major parts of it.

Potter explains this through Jean-Jacques Rousseau: “Rousseau recognised that the making of an authentic self is a group effort. You cannot just impose any old narrative you want onto the events of your life; the sotry has to seem plausible and sincere if it is to be accepted by others…[these vices of authenticity] include plagiarism, hypocrisy, and gossip.” [Comment: I’m not sure gossip is seen as such a sin in this parts!] 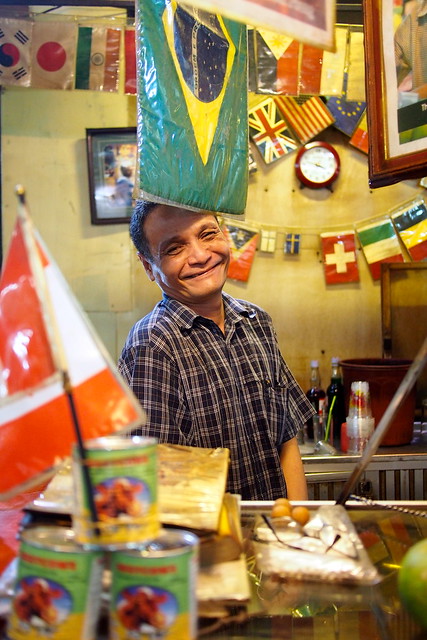 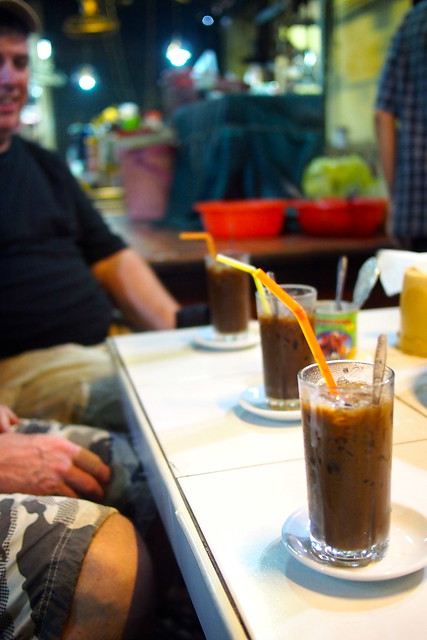 Mr. Bunnareth at Toul Tom Pom (Russian Market), probably the best iced coffee in Phnom Penh. Since his success though, several other iced coffee shops have set up next to him, forcing him to distinguish his business with newspaper cuttings, flags, and photographs 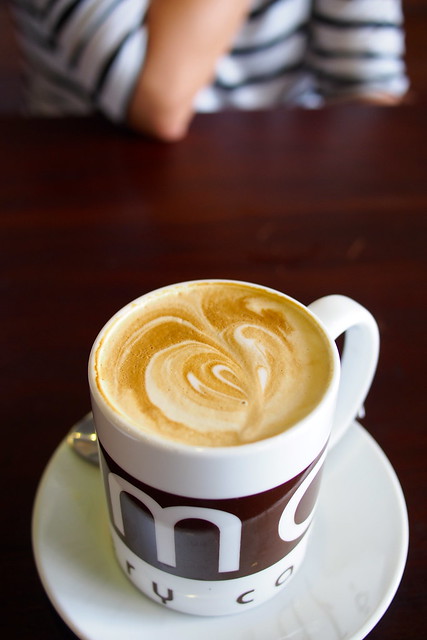 Plagiarism
Potter suggests that in some instances, the plagiarist may not even admit that there was anything morally wrong with his actions if they were “an authentic outward expression of [the plagiarist’s] deepest feelings and creative impulses; it is “the appropriation of something that is a part of [their] true self”.

And what about the rise of the concept of intellectual property rights? This might stem from what Harold Bloom calls “the anxiety of influence” where artists are concerned that they are not authentic (that is, original, creative) enough, that they have been hindered by their influences and produce only something borrowed and derivative. So we “fight over credit for things”.

Pushing back against this is Lawrence Lessig who claims this stifles creativity and innovation and squanders the democratic potential of new technologies – “What’s at stake is our freedom – freedom to create, freedom to build, and, ultimately, freedom to imagine”.

However, Andrew Keen, in his The Cult of the Amateur, sees the internet as a “cesspool of ignorance, egoism, bad taste, and mob rule. He laments the loss of the professionalism, integrity, and authority of old…As far as he is concerned, there is nothing “democratic” about the new media. If anything they work to undermine democracy by helping spread propaganda and lies through fake videos, guerilla and viral marketing campaigns and the widespread use of “sock puppets”, which are fake online identities that are used to promote a cause or a product under the guise of independent support or endorsement. There are too many places to hide online, Keen argues, and what we are left with is not the democratic wisdom of crowds but an idiocratic mob rule, a cynical and infantilised political culture and a degenerate civil society.” [Comment: sounds like what the Singapore internet scene is like in this age.]

Cass Sunstein sees the internet as harming democracy due to the rise of the “Daily Me”, that is, the way the “internet permits highly personalised and customised information feeds that guarantee that you will be confronted only with topics that interest you; they screen out those that may bore, anger, or annoy you…[leading to] group polarization: when like-minded people find themselves speaking only with one another, they get into a cycle of ideological reinforcement where they end up endorsing positions far more extreme than the ones they started with…the blogosphere functions as a series of echo chambers, where every viewpoint is repeated and amplified to a hysterical pitch. As our politics moves online…we’ll end up with a public sphere that is partisan and extreme…The result…will be serious obstacles not merely to civility but also to mutual understanding”.

So this is a world where truth has ceased to have any relation to reality and is only what the self-contained ego feels to be true.  Keen and Sunstein conclude that “the ultimate goal of the new [Read-Write] culture is isolation, solitude, and narcissism” Potter disagrees and suggests instead that it is connectivity and “the perpetual and utterly transparent We of social networking” that is the taken to be the basis for authenticity. 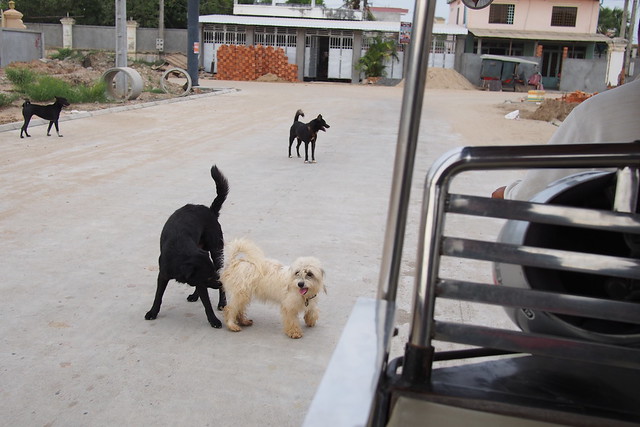 Gossip
Authenticity in this culture is where everything is laid bare online for everyone to see, nothing is hidden, and everyone speaks his mind spontaneously without self-censorship, declining to observe social mores or standards of good taste.

“Our lives now resemble the teenaged prison called high school, where the predominant form of discourse is something known as gossip…Gossip is often defined as malicious or harmful talk about the private affairs of others…” 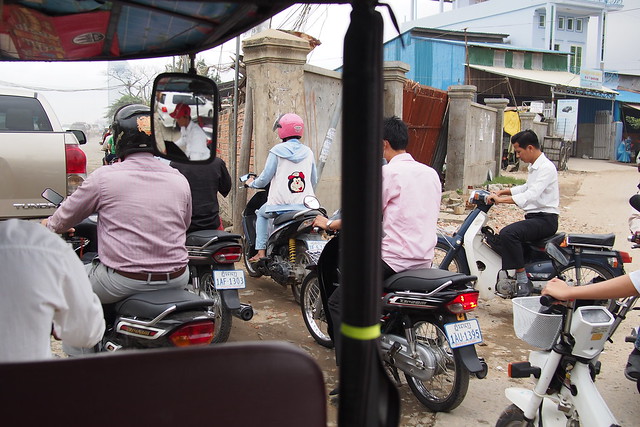 Potter however defends gossip for serving to “expand our consciousness of what life is about in ways that are effectively inaccessible to other modes of inquiry”. Furthermore gossip “subverts traditional hierarchies: by cracking open the private sphere to general public scrutiny, gossip can be an instrument of egalitarianism and social leveling…we may want to call gossip a virtue of authenticity.” [Comment: but this fails to acknowledge the difference between repeating truths and repeating falsehoods]

Perhaps, he then says, “there is a flaw in the ideal of authenticity as complete disclosure”, but only because voluntary discretionary personal disclosure is “a way of building trust and fostering intimacy”, so the “Facebook-style habit of promiscuous disclosure very much misses the point” and makes such transparency much less valuable because it is shared with a wide audience.

He concludes: “But there’s no dignity in doing your job or remaining faithful simply because you have no option. Thus the end of privacy will also mark the end of our cultural adulthood. Surveillance is for criminals and pointless gossip is for children…”[Comment: this feels (ah, feeeelin’) like a long shot. as if he sensed (feeeeeeelin’) that total transparency at the expense of privacy was undesirable and just needed a reasonable rationale (but why not just feeeeeeeel). Most commentators, having pushed God out of the picture ab initio, struggle to align their consciences with their theories.] 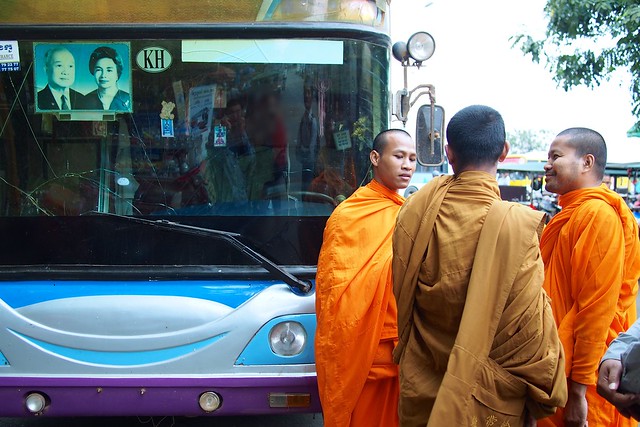