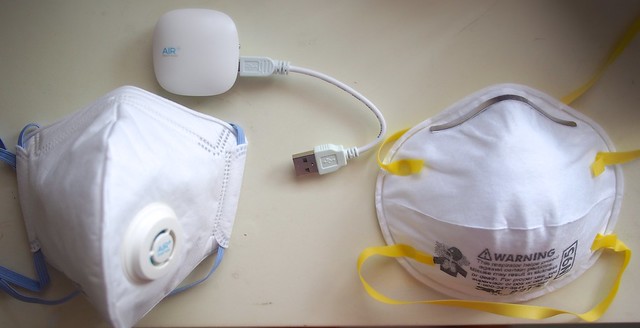 Since the Indonesian forest fires have had Singapore and bits of Malaysia on choke-hold a few weeks ago, I’ve manage to cruise along without much protection. But the recent onset of stinging in my respiratory tract has finally convinced me to play the adult and acquire a mask or two.

Most of the usual pharmacy chains (Guardian, Watsons) carried both the usual 3M N95 variety (introduced to the general public during the SARS period) and the much newer and more design-conscious Air+ Smart Mask (S$7.20 for a box of 3, S$29.90 for the micro-ventilator. 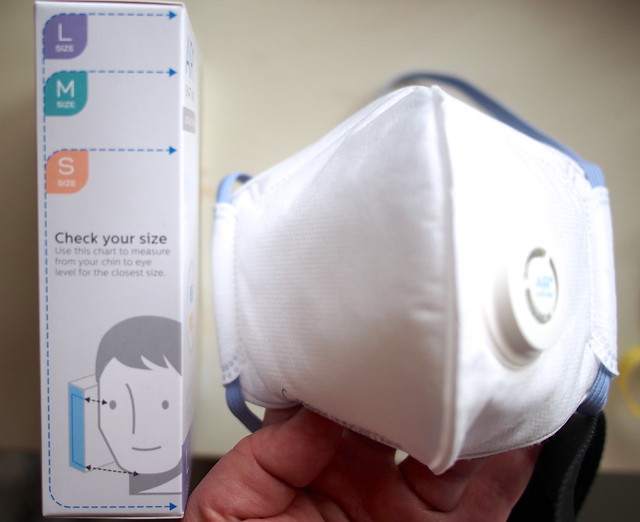 The friendly (over-friendly! said LL) sales assistant warned us that the medium sized Air+ was far too small and suggested a large for all adults. Our chat turned a little to international relations with Indonesia, the home of the “transboundary haze”.

The recent hesitation of Indonesian politicians to accept Singapore’s offer of help to control the fires (“yes they did“, “no we didn’t“) might be explained by the relationship between the countries and their self-perception in the regional arena.

…size could also be a reason for the failure to resolve conflicts between Singapore and Indonesia. Size, in this sense, can be interpreted literally as well as symbolically, as the self-images of both countries. Both the original conflict in 1968 as well as the current one in 2014 have been directly attributed to size. When then-Prime Minister Lee Kuan Yew turned down a direct appeal by former President Soeharto to pardon the two Indonesian marines, in the words of former MFA Permanent Secretary Bilahari Kausikan, “he could not have done otherwise without conceding that the small must always defer to the big and irretrievably compromising our sovereignty.”

However, if Singaporeans are adamant that the small must not defer to the big, then the Indonesians are equally adamant that the big must not defer to the small. A few days ago, Indonesia’s Coordinating Minister for Political, Legal and Security Affairs Djoko Suyanto declared that “the fact that there is a different perception of Indonesian government policy by other countries, in this instance, Singapore, cannot make us backtrack or be uncertain about carrying on with our policy decision and implementing it.” Golkar MP Hajriyanto Thohari, deputy chairman of the People’s Consultative Assembly, went one step further, declaring “Let Singapore keep shrieking, like a chicken beaten by a stick.” (Singapore and Indonesia: An Uneasy Coexistence?, Yvonne Guo, The Diplomat, 2014)

In the aftermath of the Indonesian navy naming their warship KRI Usman Harun, after two Indonesian marines executed in Singapore in 1968 for a 1965 terror attack on MacDonald House in Orchard Road, there were rather self-righteous and dull comments about how Singapore should have spared those men.

These commentators seemed to forget to take into account (i) the context of that event in Singapore’s national history (1965 was the year of its independence; and (ii) the context of Singapore in regional politics.

…the respected American scholar of Indonesia, the late Dr George McTurnan Kahin, wrote in 1964 while Konfrontasi was still ongoing, that episode of aggression towards its neighbours was the consequence of the “powerful, self-righteous thrust of Indonesian nationalism” and the widespread belief that “because of (the) country’s size… it has a moral right to leadership”.

Time may have given a more sophisticated gloss to this attitude but has not essentially changed it.

This attitude lies, for example, behind the outrageous comments by some Indonesian ministers during the haze last year that Singapore should be grateful for the oxygen Indonesia provides; it is the reason why Indonesians think Singaporeans should take into account their interests and sensitivities without thinking it necessary to reciprocate. (Indonesia’s naming of navy ship: Sensitivity is a two-way street, The Straits Times, 13 February 2014)

and so instead of just keeping quiet, Singapore needed to protest this and show our stand clearly.

Curious about this ambassador-at-large, I came across his warning that “foreign policy cannot be a tool for partisan politics”

already and all too often, I see the irrelevant or the impossible being held up as worthy of emulation…

…I see our vulnerabilities being dismissed or downplayed; and I see only a superficial understanding of how the real world really works in civil society and other groups who aspire to prescribe alternate foreign policies… (Foreign Policy Cannot Be ‘Tool of Partisan Politics‘, Today, 17 September 2013)

This parallels nicely with some discussions we’ve been having about how American, English, Australian evangelical models of what godliness looks like might/might not work in a Singaporean context. But that’s for another day.

If you have an old 3M mask, check its expiry here.

Ministry of Health guidelines on the use of masks