How do you like your disneyization? I love mine full-blown, all-encompassing, no-holds-barred, please.

So the hyperreal bronze sculptures along the pedestrianised shopping street full of international brands in Wangfujing, Beijing, China? Meh, ok. 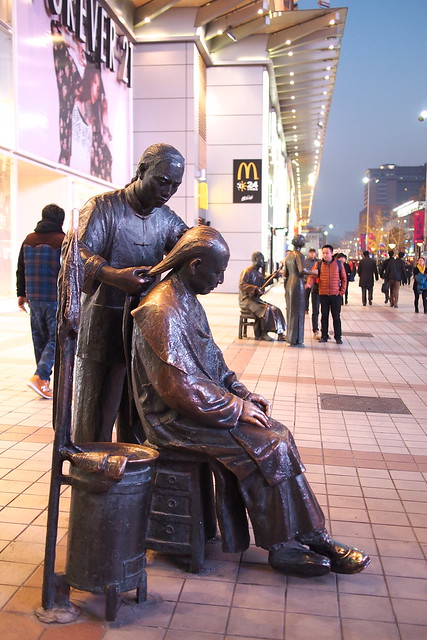 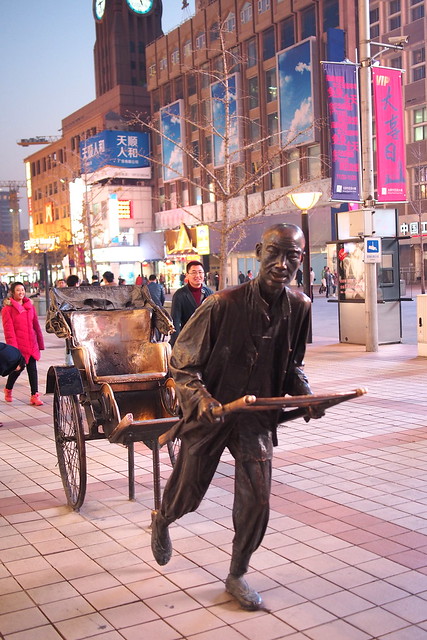 A little better: 景山公园 (Jingshan Park) that was just across from the Forbidden City and had been constructed from the excess earth excavated while building the moat around the palace. 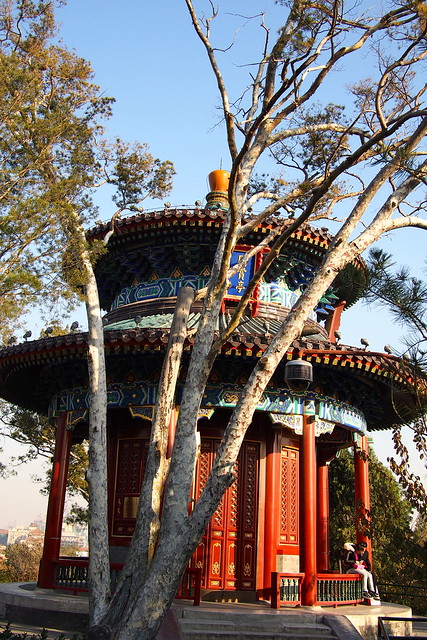 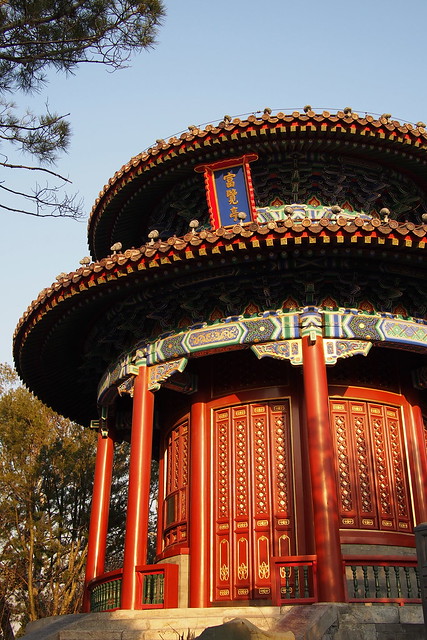 Its Ming-dynasty pavilions (that is to say, the originals were constructed then but who knows how much original material remains) offered great resting spots for courting couples and retirees. 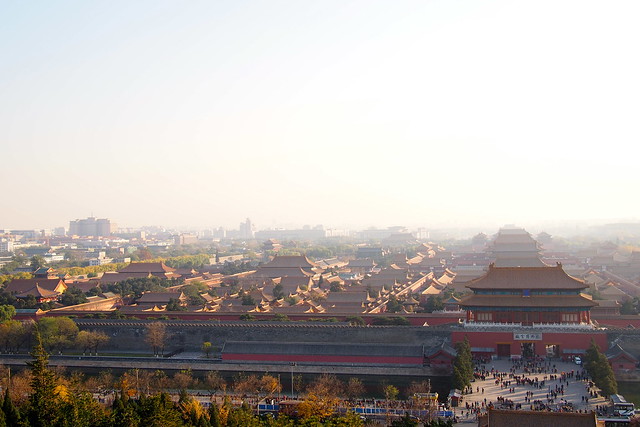 And right at the top of the mound, from the Wanchun Pavilion (Pavilion of Everlasting Spring), a great view of the Forbidden City complex. 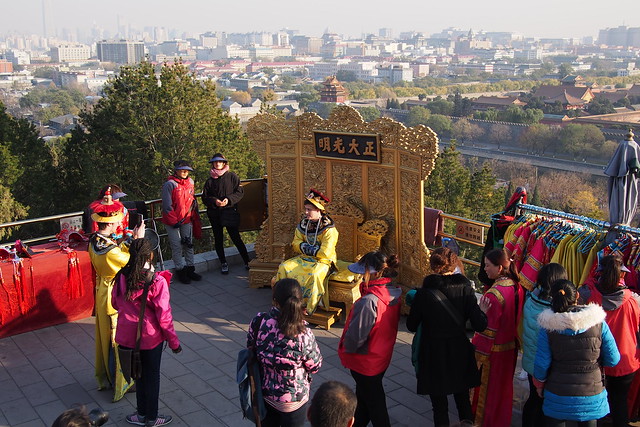 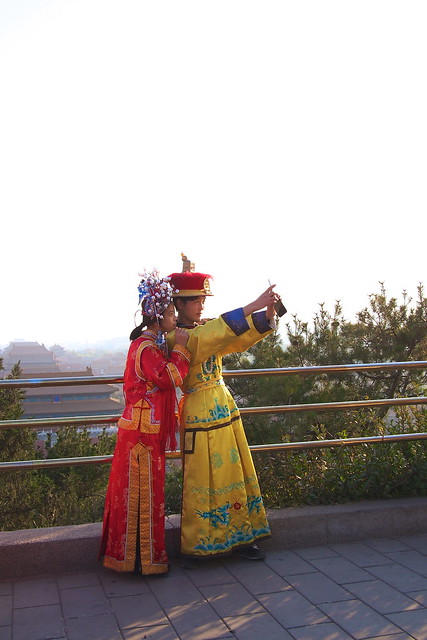 Best of all was the opportunity to dress up in period costumes, and take selfies. 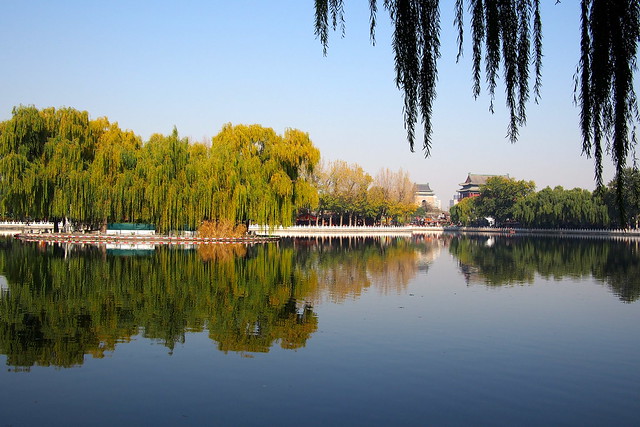 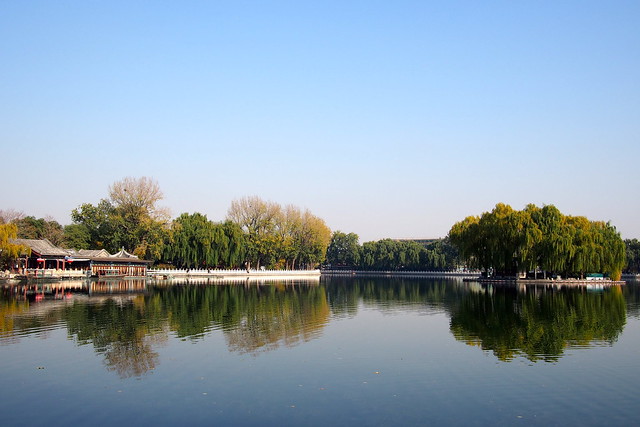 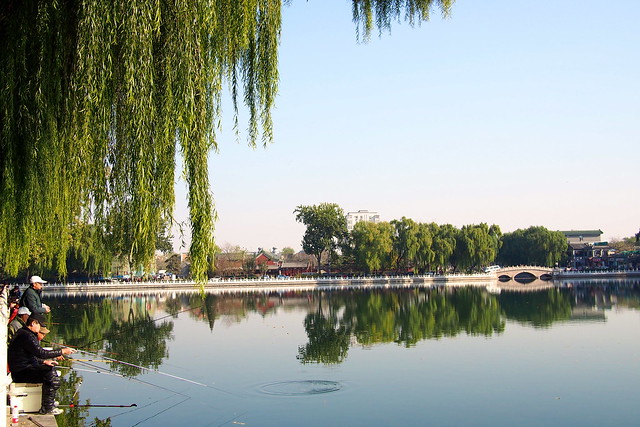 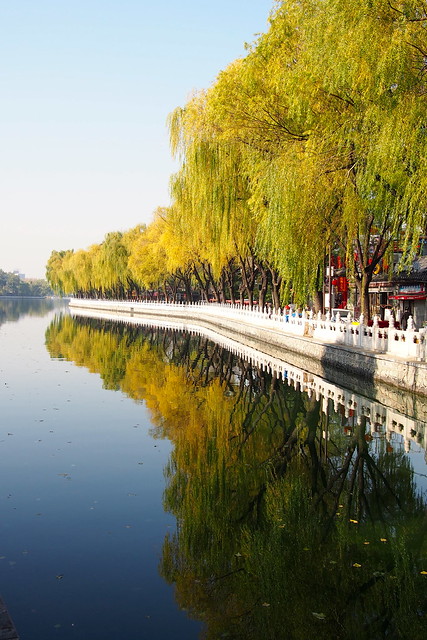 All this landscaping was first conceived a few centuries ago (or at least during the Ming Dynasty, 1368 – 1644) to conform to the Chinese idea of a place of natural beauty, where leisurely strolls could be taken by the water, under the hanging branches of willow trees. 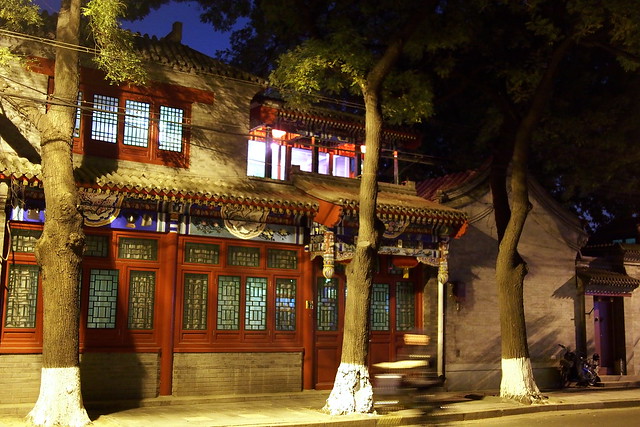 It was surrounded by spruced up hutongs that had been cleared of their residents and renovated into a historically-themed amusement park for tourists, with its tropes of ancient tea houses with caged singing birds, oriental-tiled roofs, 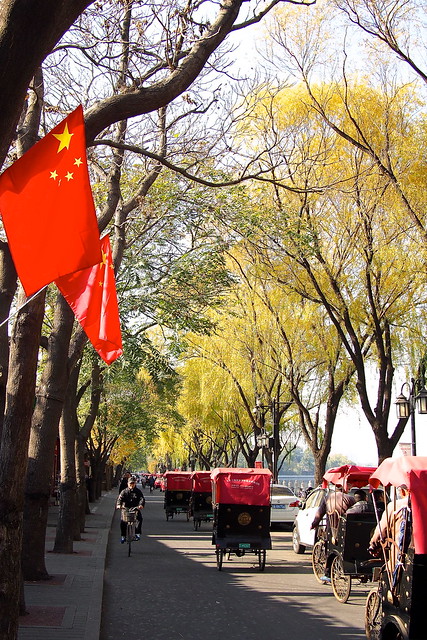 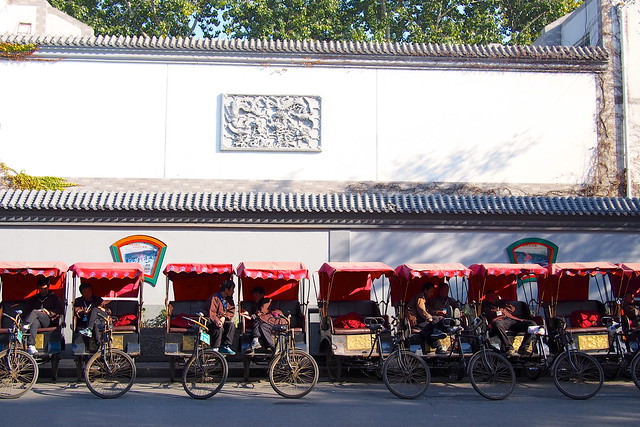 and shop-owners and rickshaw rider cartel all appropriately-attired and performing their set-pieces. 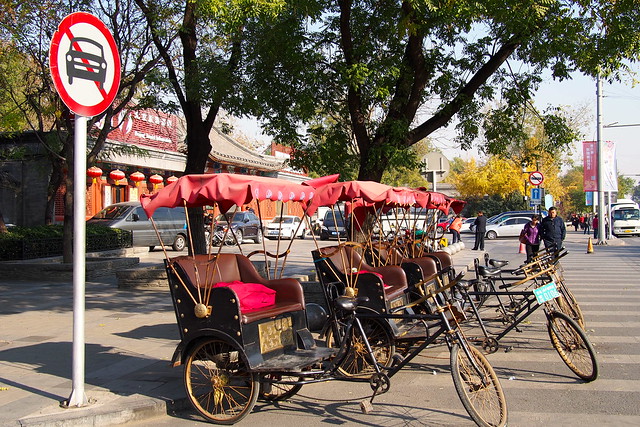 Yet, they were not playing at riding rickshaw, for that was their true occupation, and one that might not have arisen if this theme park had not existed. What delicious hyperreality in (in)authentic Old Beijing!

And then, there was just the period-insensitive merchandising: candied fruit on sticks, giant cotton candy puffs: 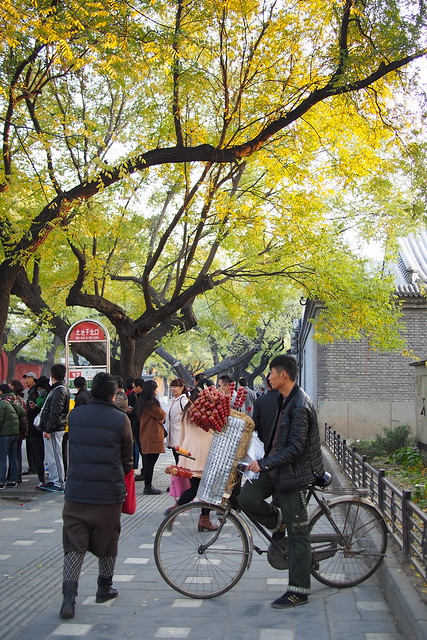 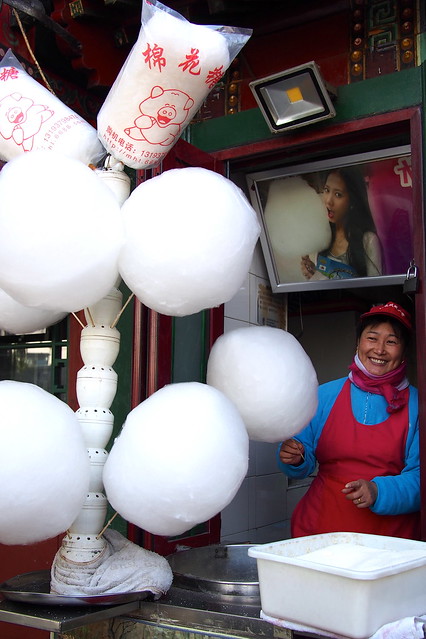 And not quite behind the scenes, but people you might want to ignore to maintain the illusion, the road-sweepers and cleaners: 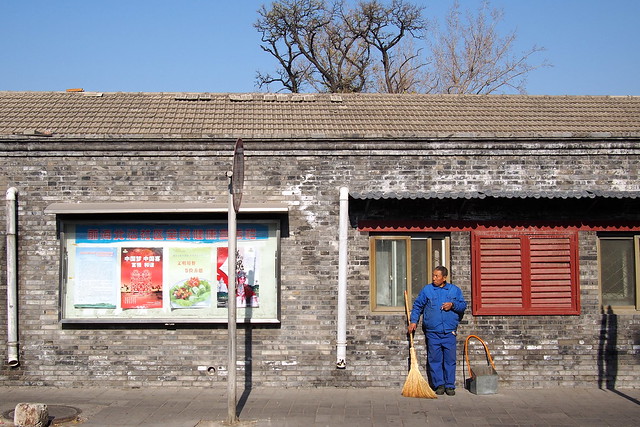 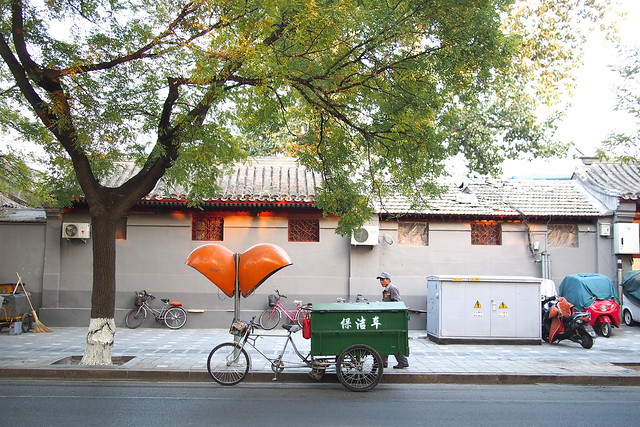 One cannot google “hutongs” without coming upon loads of complaints about the loss of authenticity after the hutongs were demolished or sanitised of all grime, rats and vermin, falling tiles, pot holes. 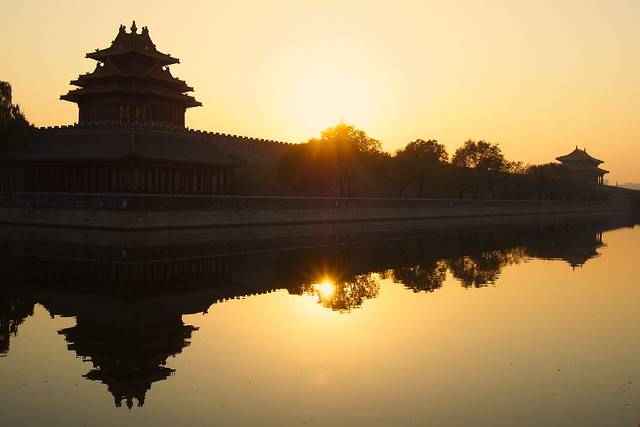 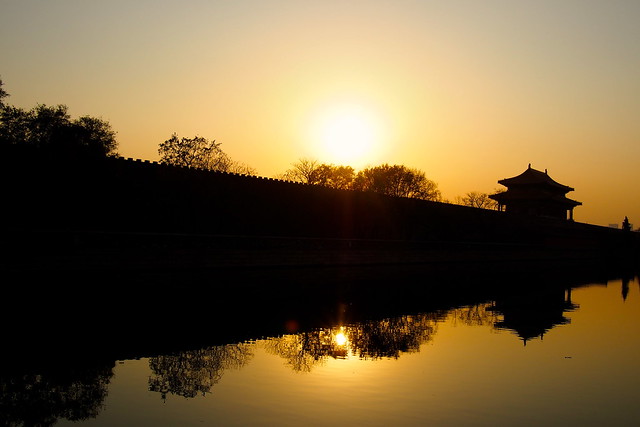 But first, what is this authenticity that we all seem to hold in high regard yet appear unable to accurately define? 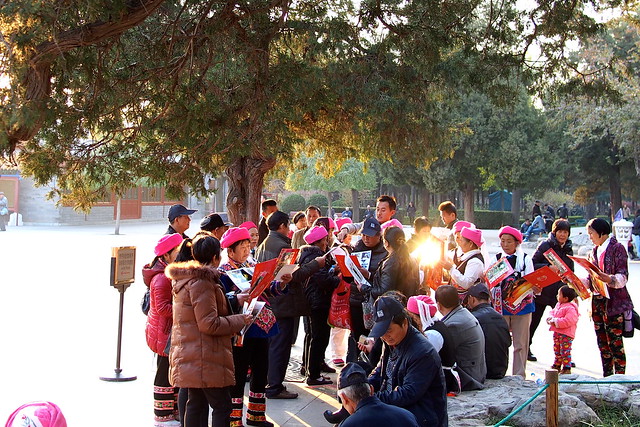 Would this scene be less authentic if you knew these people had been auditioned and given costumes to wear? What if they were really from a minority race, local tourists visiting from a village, but told to put on these outfits by their tour agency? And should they not even have gotten help from a tour agency to see the big city because that would make their experience inauthentic?

And second, why would the presence of “authenticity”, if it could be defined, be preferable for life and for society?