Because I run with the older crowd, there have been quite a few 40++ (“the new 30s”) birthday celebrations since the start of 2015. At that age, it’s not that much of a treat getting stuff since they have the financial means to buy whatever they want. So rather than going with the cake-fad-of-the-month, we’ve had fun searching out retro cakes and snacks for the occasion. You’re never too young to get all nostalgic. 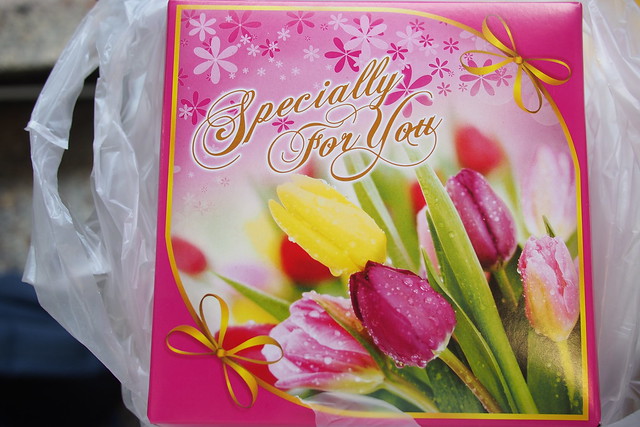 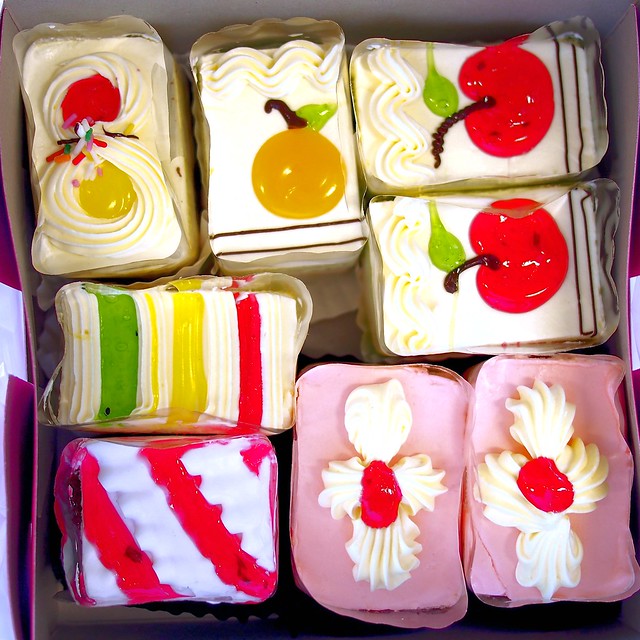 Sponge cake slices with buttercream frosting held up amazingly in our hot and humid Singapore weather. They were from Nice Bakery in Ang Mo Kio (S$1 per slice). A few streets away, Pine Garden sells similar cakes for S$1.50. 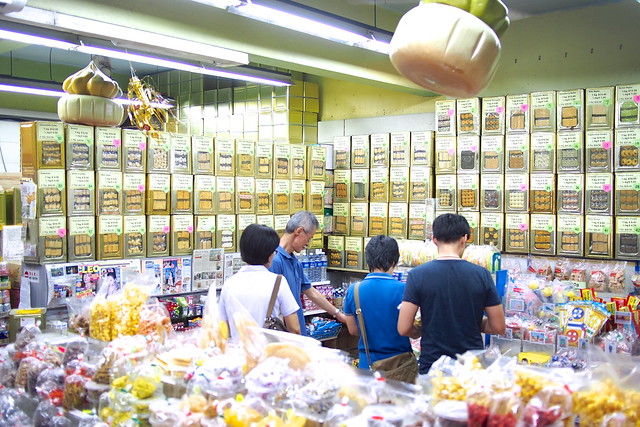 Biscuit King (130 Casuarina Road, Thomson) is almost a one-stop shop for the snacks and toys and games that kids in the 1980s would have counted out pockey-money for at corner mamak shops and the drinks stall in the school canteen: 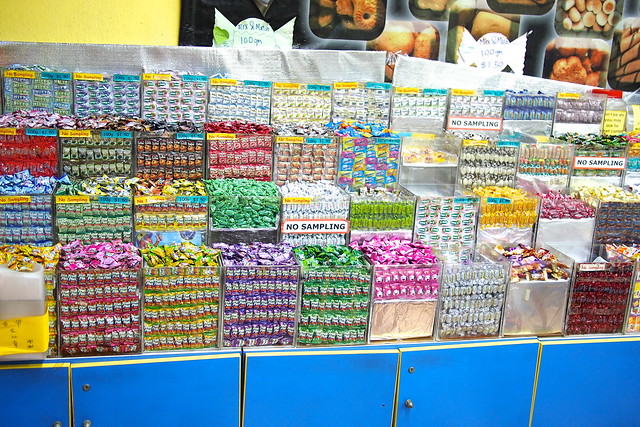 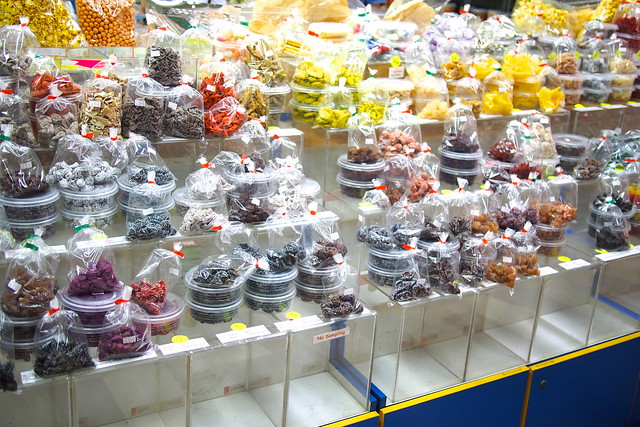 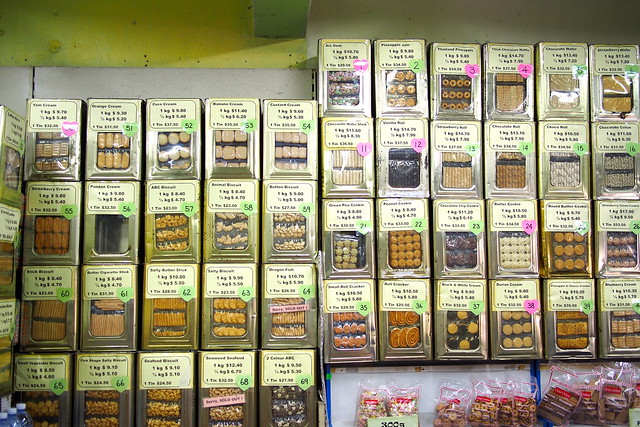 tins of biscuits (usually from Khong Guan) – you pointed to what you wanted and the shopkeeper would then weigh your selection. I liked the ice gems (and debating the best way of eating it – icing first? biscuit base first? indulgently, both at one go?), pineapple jam in a flower-shaped biscuit, cashewnut cookies topped with one half of a cashewnut, salty sticks, butterfly crackers, peppery roll crackers. 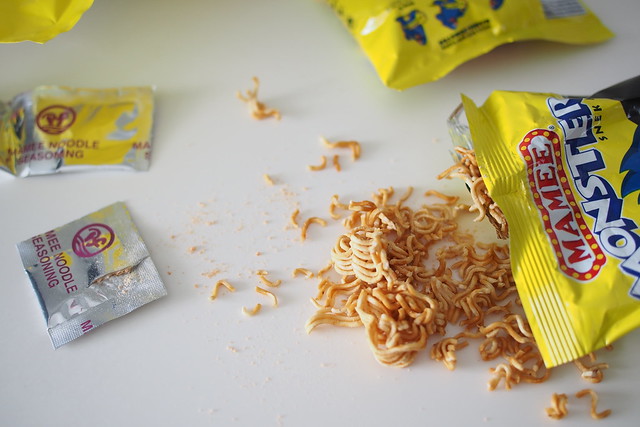 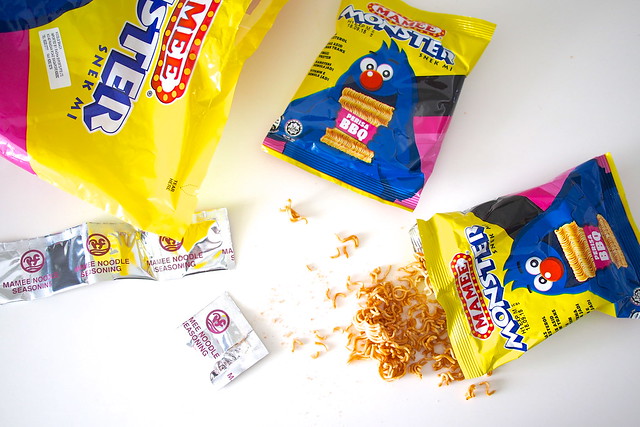 Mamee Monster (S$1.50 for a bag containing little packs from discount shops around Singapore) – seasoned instant noodles (in chicken or BBQ flavours) that you crushed in the packet, added even more seasoning to, then shook about to distribute evenly amongst the dried noodle fragments. I’m surprised they haven’t made a molecular gastronomy equivalent of this yet. 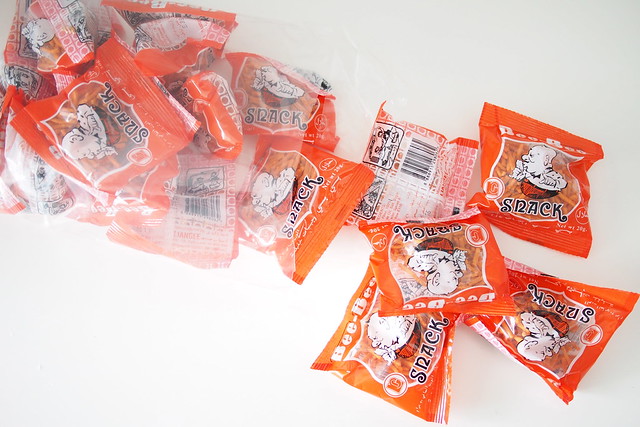 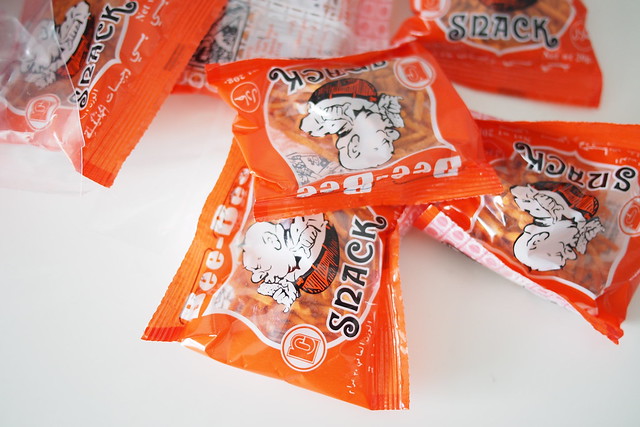 Bee-Bee Snack (S$3 for a bagful). The sort of fried flour stuff you ate after swimming class or while waiting for the school bus, after you’ve had your deep-fried chicken wings of course. 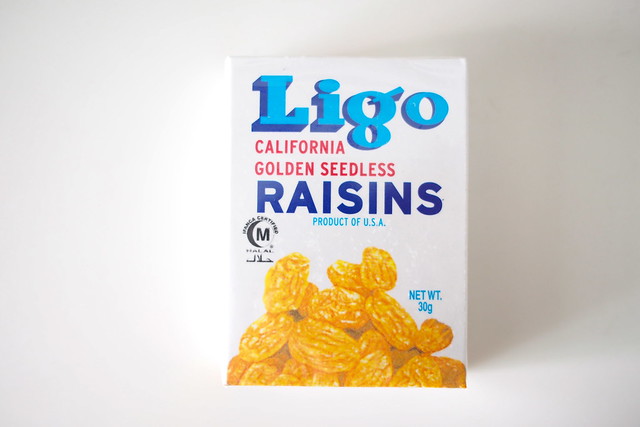 Ligo California Golden Seedless Raisins – supposedly the healthier snack. But with that amount of sugar… Sometimes the raisins were too dry and you needed to work them in your mouth so your saliva plumped up the wrinkles. 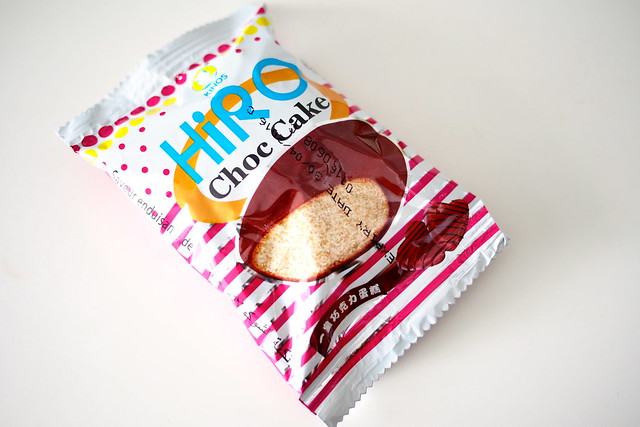 Kinos Hiro choc cake (S$0.40, Biscuit King). Some sort of sponge with a chocolate coating, tasting of nothing in particular. You needed several to fill you up. 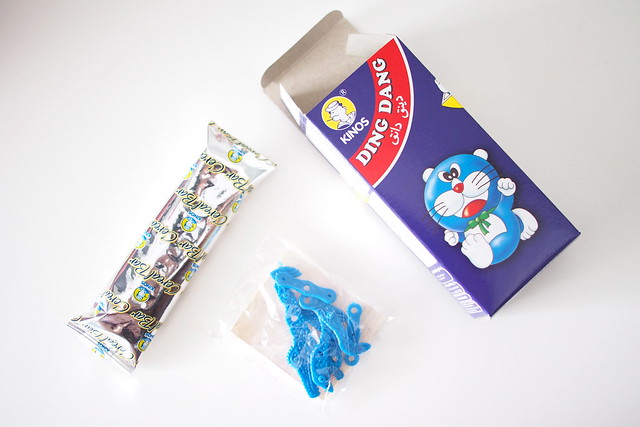 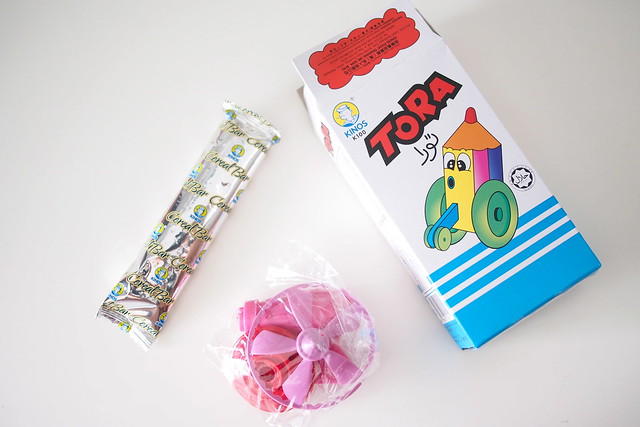 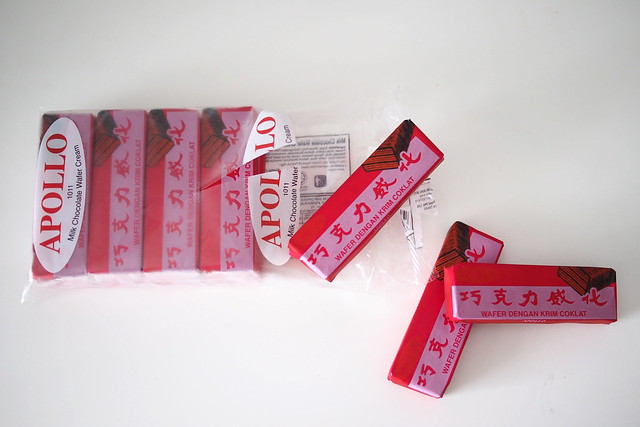 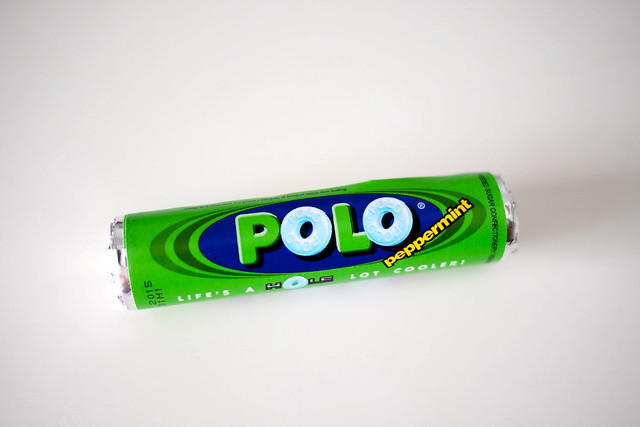 Polo peppermint sweets (S$0.40, Biscuit King) – we offered them to friends, sucked them so that the circle remained intact, then tried to whistle through them. 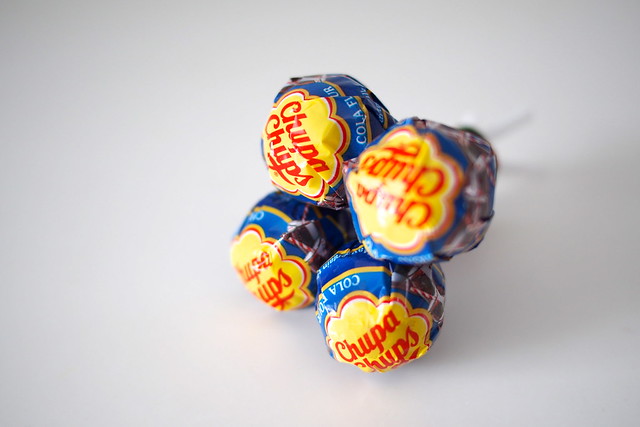 Chupa Chups. Didn’t know they were a brand of Spanish lollies and that their logo was designed by Salvador Dali! Obscure flavours were the most sought-after. When you were done, you tried to whistle through the empty stick, or chewed on them like you didn’t know about the dangers of BPA, or flicked them onto unsuspecting classmates. 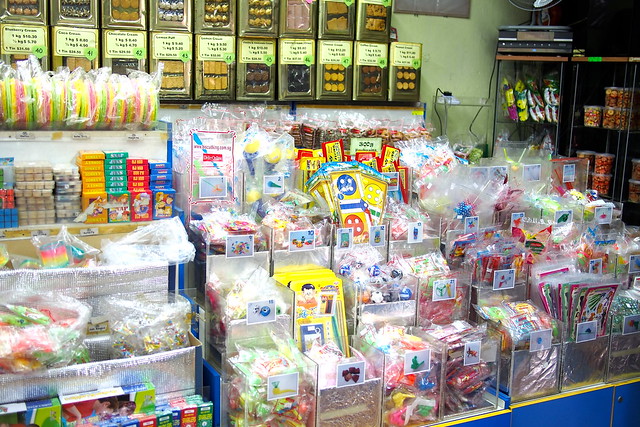 Ah, and what about those childhood games before everyone sat in the canteen and stared at their smartphones? Goli (marbles), national flag erasers, hopscotch, zero point (jump-the-rope with a rope of rubber-bands), snakes-and-ladders, aeroplane chess, pick-up-sticks, Chinese checkers, kuti-kuti (small colourful plastic tokens), 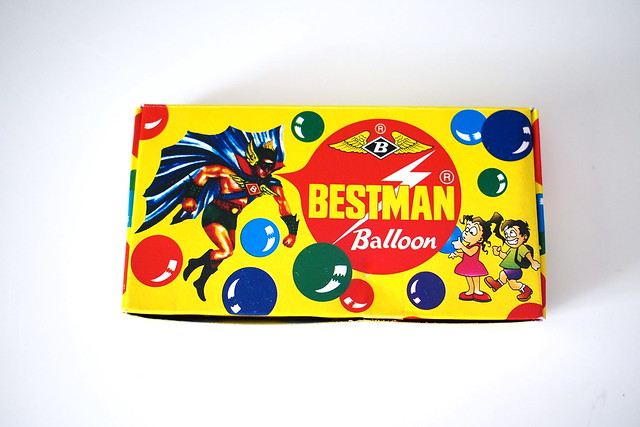 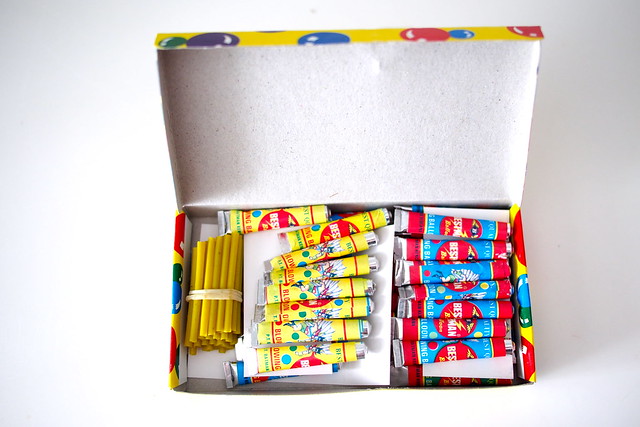 Bestman Balloon (S$1.20, from the man outside Sheng Shiong Bedok). A whole box just feels like an indulgence. I think we used to get just one or two tubes each, and had to make it last. 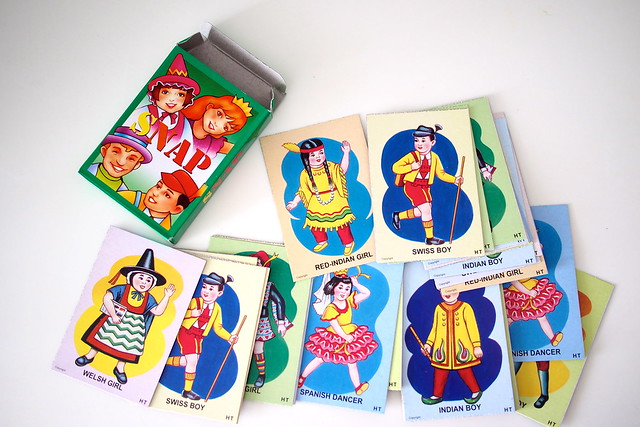 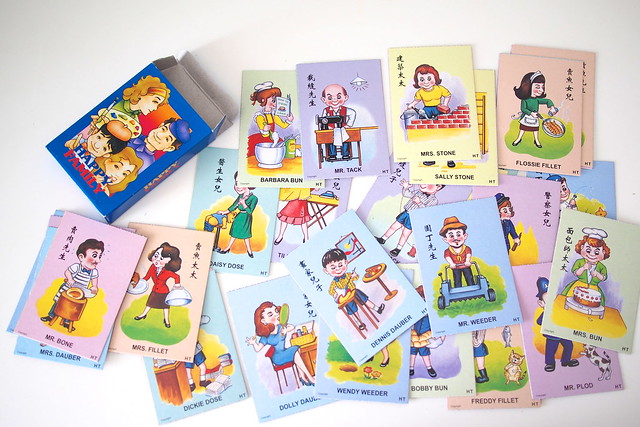 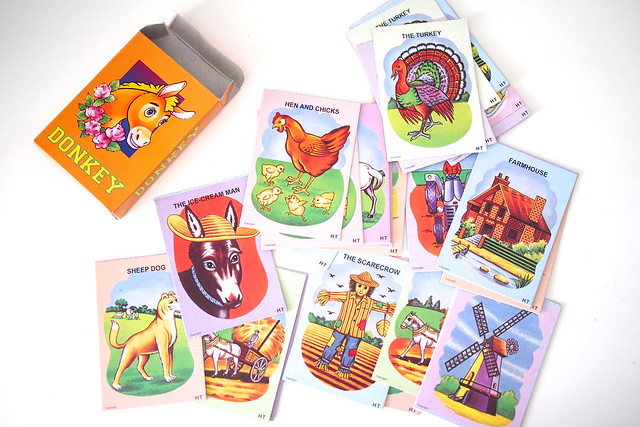 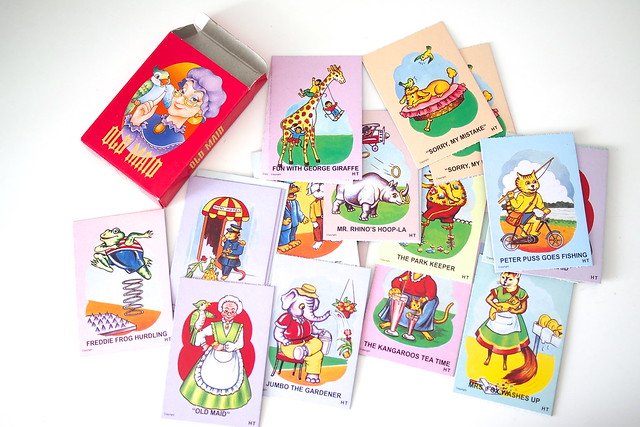 Snap, Happy Families, Donkey, Old Maid card games (S$2.50 for 4 packs from the man outside Sheng Shiong Bedok, S$0.60 each from Party Mama Shop) – these cards aren’t as good quality as they used to be.

On the bus today, an old man in front of me was commenting to his wife as we passed the graves opposite MacRitchie Reservoir:

“See, look all the graves. There are all these young people, keep getting angry that the graves are taken away. For what? All these dead already. And they think they live so nicely in their houses, go to their schools, drive on all the roads, don’t need to knock down old things? Always complain traffic jam, complain too expensive, complain everything. Ask them to take care of a family, a big family, they can anot? They can fit into one house meh? Cannot, then complain. Why not throw away all the old things, then can fit. We all did it before, why they cannot? Stupid nonsense, think they’re so smart!”

Nostalgia is nice and neutral, but we never stop there do we? We rose-tint the past, we talk about the “good old days” when things were better and easier, when people were honest and caring, things were just more authentic. And we know about the inauthenticity of authenticity. 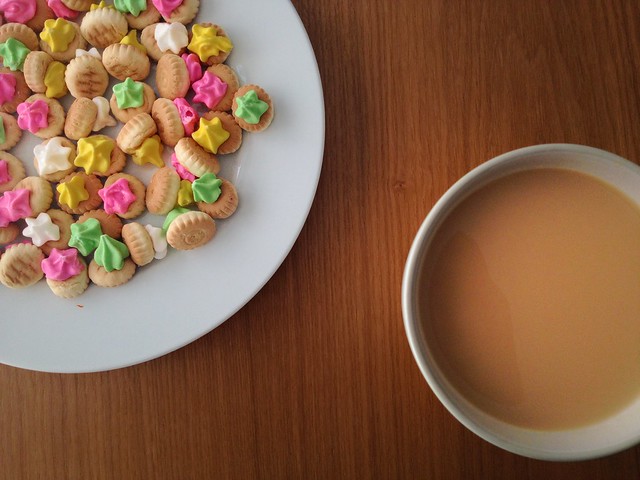