From earliest memory, I’ve had terrible nightmares lying in bed sick. Head throbbing with high fever that resisted all parental midnight sponging, I’d thrash about, sweating, limbs flailing against visions of the terrible chaos of the universe, the untameable fabric of creation, of unending ever-morphing fractals, unceasing mathematical conundrums, an eternity of recursions…

And this was before I even learned my sums.

(How hard this was to explain to adults. How I wished I dreamt of something more normal – like monsters, or ghosts, or of falling…) 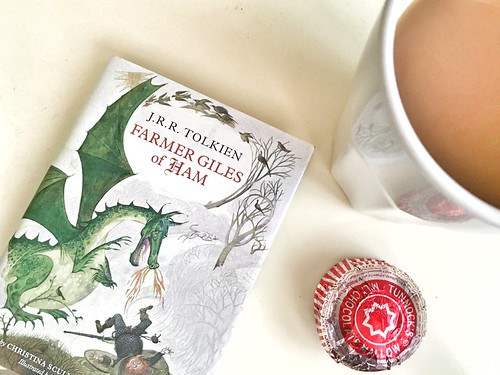 Decades later, my sickbed nightmares continue in the same vein. Except now, I can (mostly) articulate the horror.

These last few feverish days have been a pox-stench web of the Problem of Points, of binomial theorem all mixed up with Hebrew chiaisms, of the simultaneous simplicity and complexity of Pascal’s arithmetic triangle, the small yet infinite glimpse it (and any similar or derivative models and sets, like the Fibonacci sequence) offers into the intricate weave of the entire time-space…

When the most recent struggle was finally over and I’d awoken from a dreamless denouement on a damp bed, I sought solace in the material; in the comforting here-and-now-ness of a tall mug of thick hot milky tea, a chocolate confection (Tunnock’s milk chocolate mallow teacake), and a simple book where dragons were scared off (J.R.R. Tolkien’s Farmer Giles of Ham) and all ends were tied up very nicely indeed.

And solace also in the Father, of whom Isaiah says:

Do you not know?
Have you not heard?
Has it not been told you from the beginning?
Have you not understood since the earth was founded?
22 He sits enthroned above the circle of the earth,
and its people are like grasshoppers.
He stretches out the heavens like a canopy,
and spreads them out like a tent to live in.
23 He brings princes to naught
and reduces the rulers of this world to nothing.
24 No sooner are they planted,
no sooner are they sown,
no sooner do they take root in the ground,
than he blows on them and they wither,
and a whirlwind sweeps them away like chaff.

25 “To whom will you compare me?
Or who is my equal?” says the Holy One.
26 Lift up your eyes and look to the heavens:
Who created all these?
He who brings out the starry host one by one
and calls forth each of them by name.
Because of his great power and mighty strength,
not one of them is missing. (Isaiah 40:21-26)