The official name of a city re-named for the revered revolutionary who defeated French and American powers to unite the country we now know as the Socialist Republic of Vietnam.

(French and American tourists, of course, still stubbornly call it “Saigon” to this day.)

Looking out the window on the bus to the city centre from the airport, I’d wondered what to make of the eye-catching propaganda billboards in the city I’d worked in so many years ago. How much of an indication were they that there remained a certain innocence in relation to commercial things, a relatively sweet, laid-back calm/inertia from a lifetime of state-sponsored welfare? 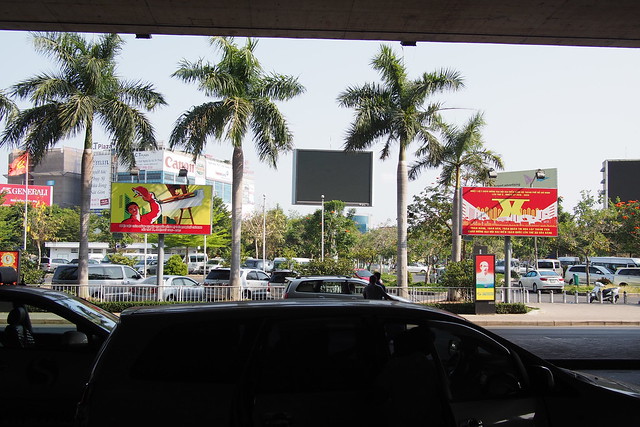 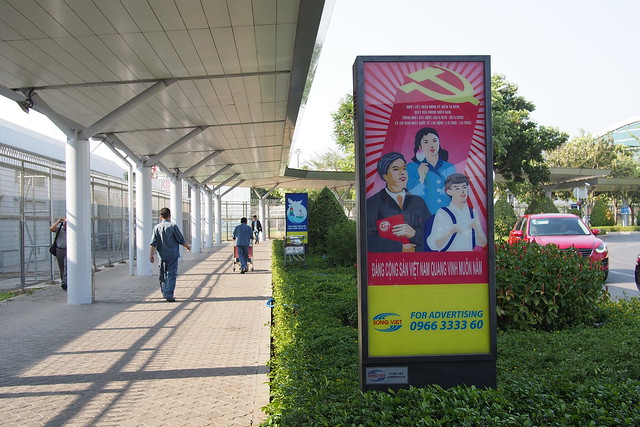 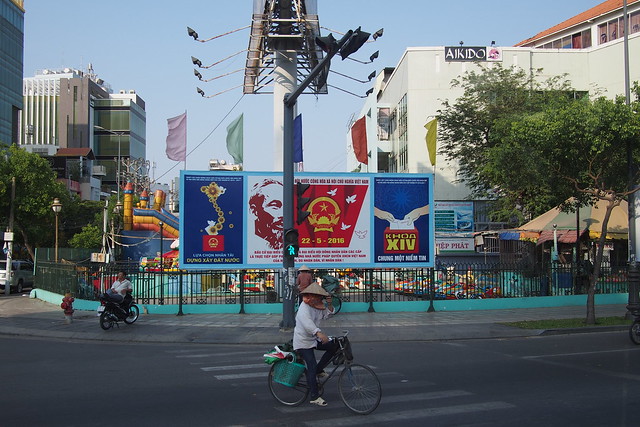 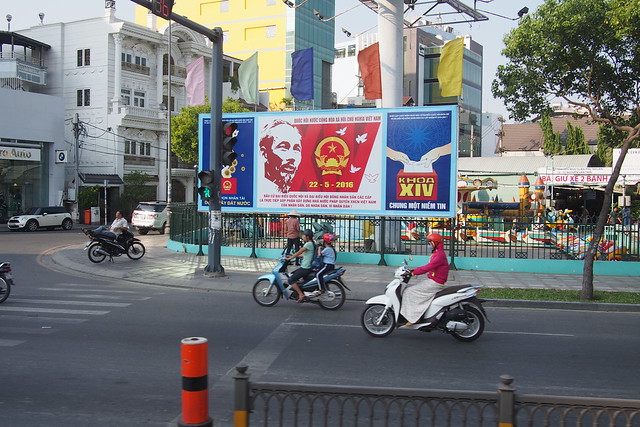 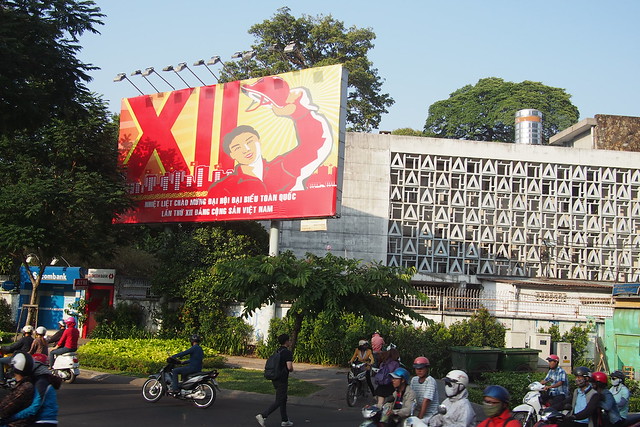 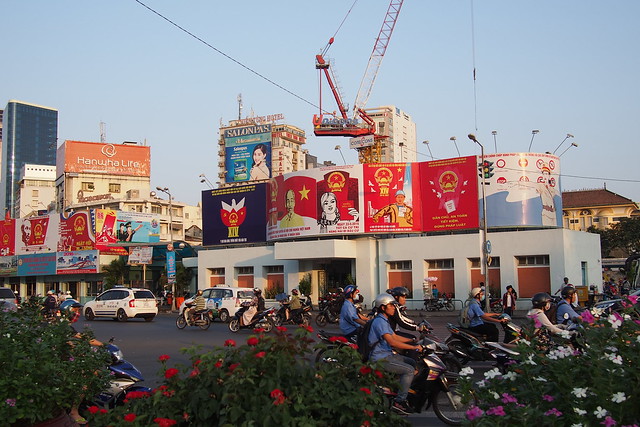 Amidst the roundabouts of relentless beeping of motorcycles and honking of cars, and the fumes of old exhaust pipes that made commuters cough up phlegm behind their cloth masks, and shiny new buildings jostling against the yet-to-be-bought-out crumbling ones, the Bitexco Financial Tower stood shining in the afternoon sun, holding aloft a helipad – like the Statue of Liberty and her torch. 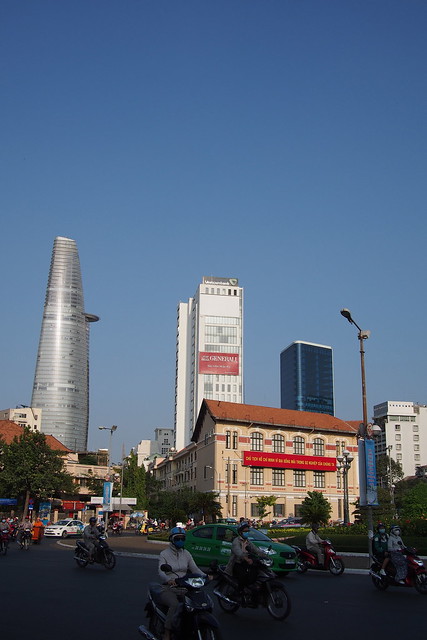 Thanks to Đổi Mới, perestroika-like economic liberalisation, HCMC had taken on the feel of the capital of her capitalist Thai neighbour, Bangkok.

Commercial signboards and advertising were more in evidence: 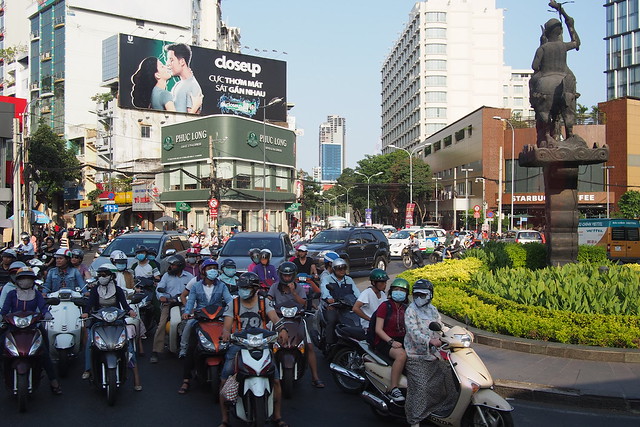 And in Ben Thanh Market, where formerly, you had to rouse a sleepy salesgirl to ask a question, you were now preyed upon aggressively once you entered its shady confines. “Hellloooo. You buy something. Cheap!” called out the predators as you attempted to navigate the narrow alleys between stalls. Some reached you in time to tug a sleeve, or thrust a mass-produced souvenir into your chest.

“I give you good price!”, they chorused, making no effort at all to extol the virtues of their wares,”Buy some thing!”

In the food section, my favourite stall had shuttered for the day, 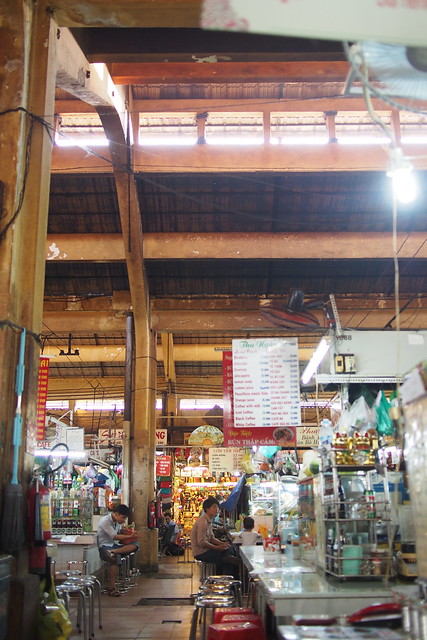 leaving me at the mercy of the food touts. I ordered a Bún bò Huế, and sat down. Some time later, I was given a pho bo.

“Sorry I think I ordered Bún bò Huế?”
“Yes, yes.” said the woman, and hurried off. A few minutes later, I saw her waving a menu at tourists. There was no one fixing a Bún bò Huế.
I hailed a man who seemed to be somewhat related to the enterprise.
“I ordered a Bún bò Huế but this is a pho bo.”
“Okay, okay,” he said, and showed me the menu.
“No. This is not Bún bò Huế.”
“Okay, okay, this is Bún bò Huế.” he said, and gestured at what was obviously the wrong colour for such a dish, and left with the menu.
It took a third attempt with a different member of the jolly gang to have someone make me a Bún bò Huế. 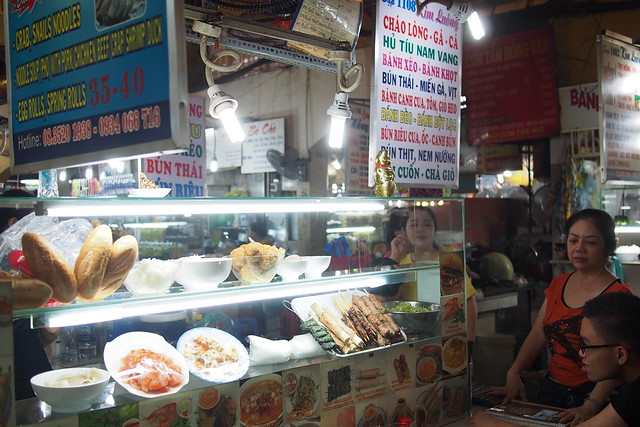 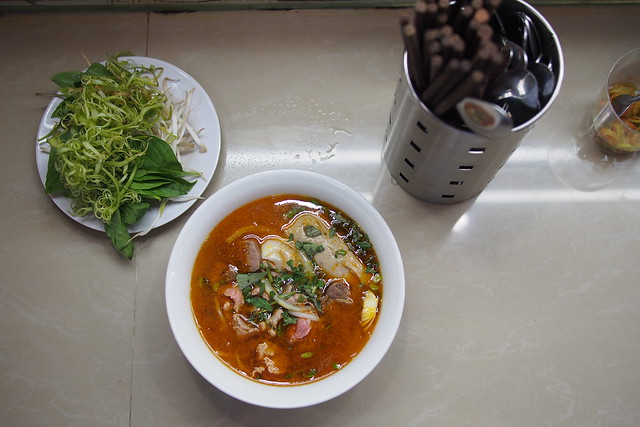 It was difficult to tell if this was lack of language ability or an attempt to cheat the tourist. I’d plump for the former, since the man was quite apologetic after.

(What did this mean then for the training we’d done for some local friends? When they’d nodded and appeared to have agreed, could those gestures have meant nothing more than the acknowledgement that we’d said something? Though what, exactly, might have been a mystery to them?)

While this little skit was unfolding, I noticed a stream of people rocking up to the stall across the way. Banana fritters. 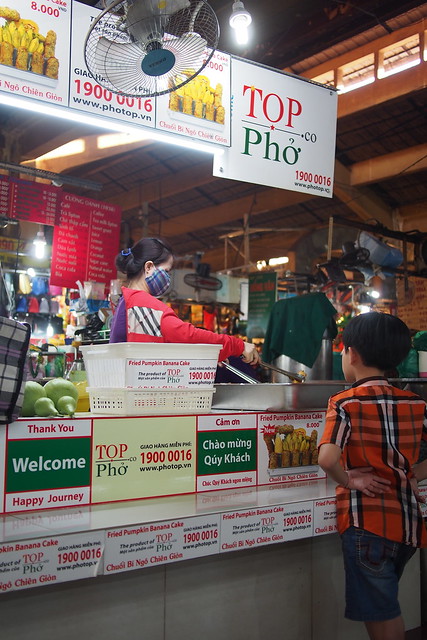 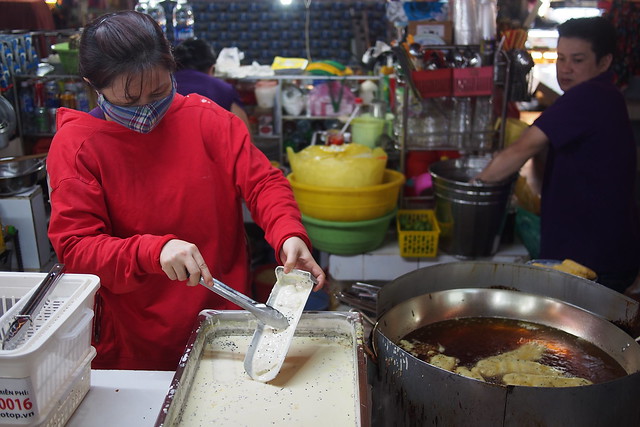 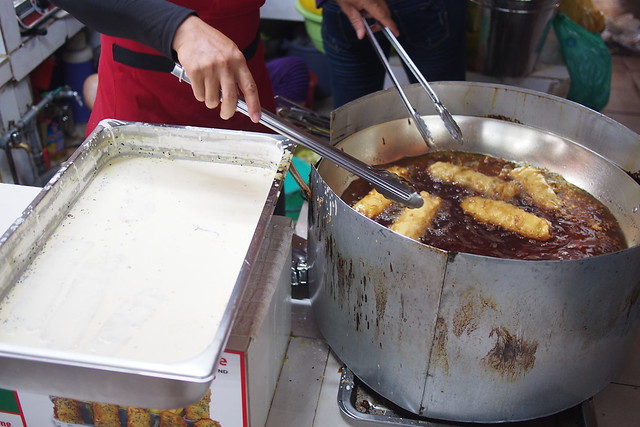 The woman deep-frying the local bananas smiled with her eyes, and indicated that she was happy for me to take some photos. There was soon a fresh queue of people staring hungrily at the boiling oil, plastic bags ready to receive the golden crunchy snacks.

The squares of recycled English language class notes though, were dodgy. Excuse I, I’m afraid I regret informing you that did not meet my expectations. 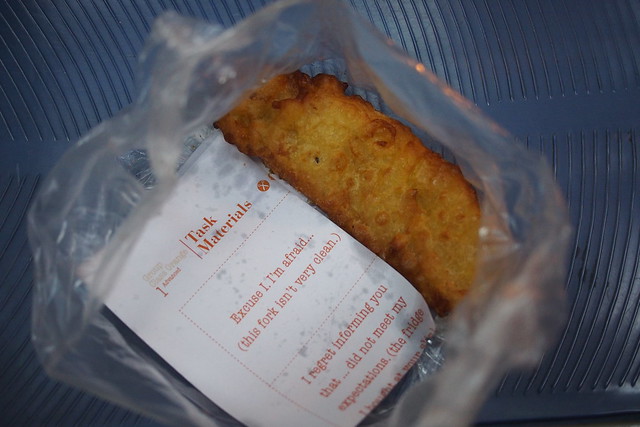 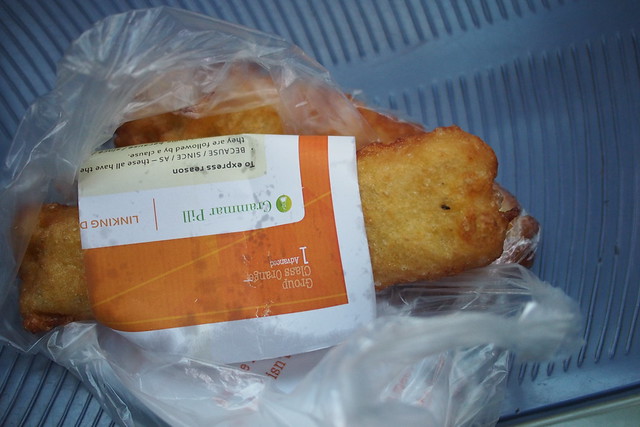 Felt the sting of God’s judgement at Babel quite badly. How marvellous a reversal the gift of tongues recorded in the Acts of the Apostles must have been – to finally be able to tell the good news to other nations. Yet, how desperate it is that such a gift isn’t quite widespread.

An incoming deacon at our small church recently suggested strongly that we stop mission trips to other countries. After all, he reasoned, there was so much work done with very little visible fruit – the translation work, the travelling, the inability to communicate effectively once there… Why not just stay in Singapore where people speak English?

And yet, and yet… 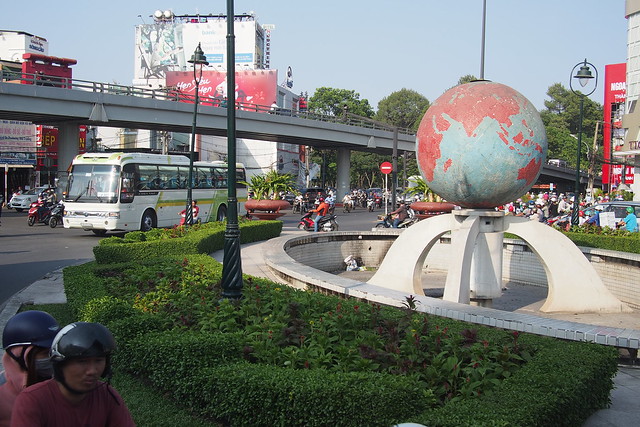 To get to the city center from Tân Sơn Nhất International Airport, walk out of the Arrivals hall. 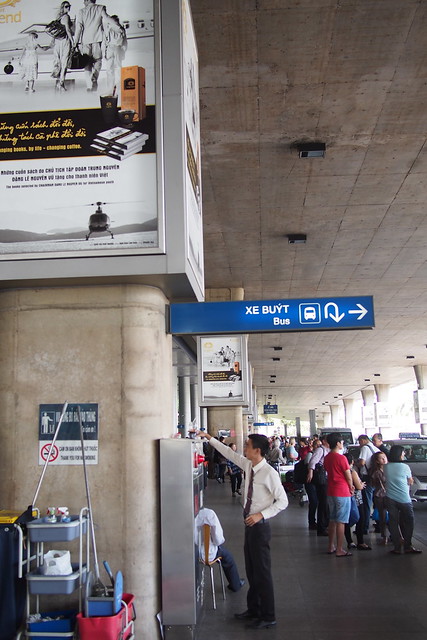 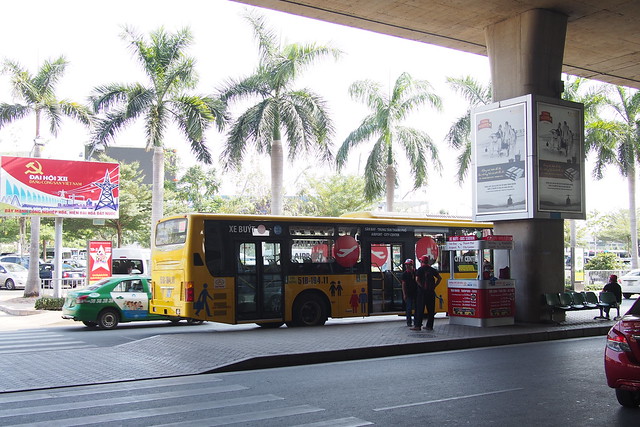 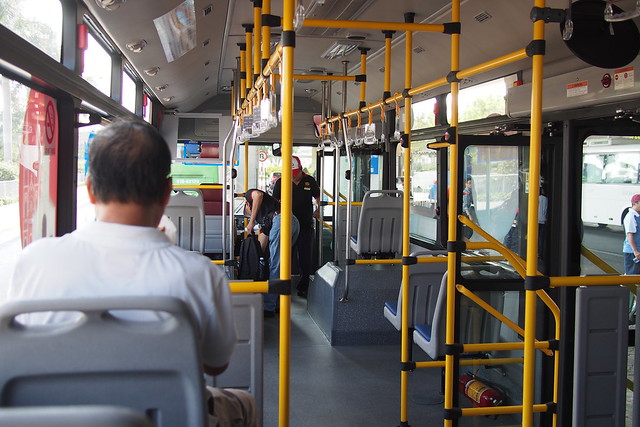 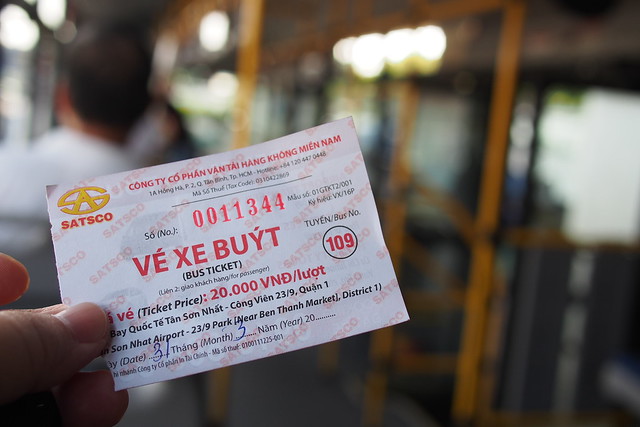 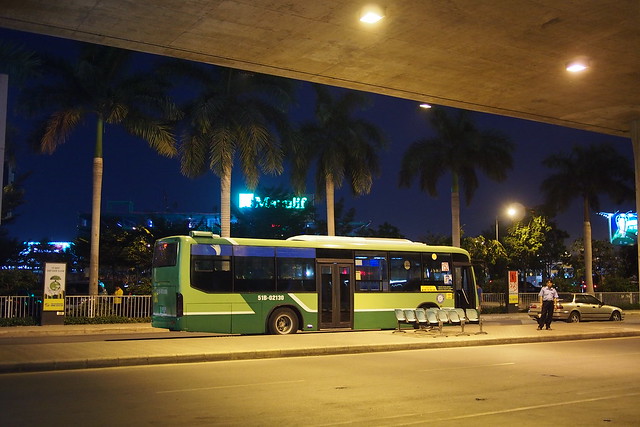 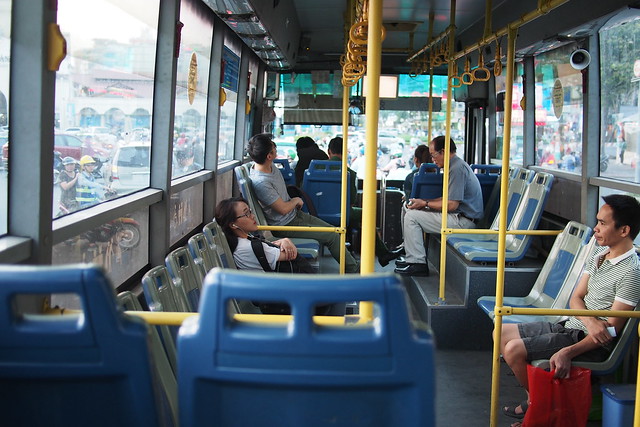 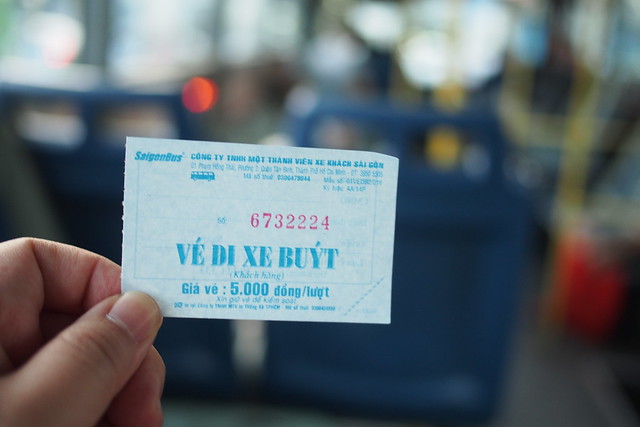