A few nights ago, sitting around someone’s dinner table, grazing on the last morsels of food, the host was describing his colleague’s weight-loss diet in bland detail: steamed unseasoned chicken breast, steamed broccoli, steamed salmon…for months on end, for each meal.

“Hmph,” said the Beefy One, shaking his head and grunting his disapproval. “Don’t have carbs, how to sleep?”

I too have been a carb fiend since my rugby/tennis/fencing/basketball days when we used to take much pleasure in constant carbo-loading. That pleasure has not ceased, though the Pizza Hut buffet has.

Whilst living off the bargain bins of London, I grew very fond of Poilâne bread, which was sold off, slightly old, very cheaply at Waitrose, St. Katharine Dock. The teeth-testing crust, the depth of flavour, made it a sure winner.

Bakers in Singapore seem to think their customers all gumless babies – what passes as bread is commended for its “pillowy softness” and light milky texture, and is disconcertingly sweet.

Knowing I’d have to make-my-own sourdough in Singapore, I’d experimented quite successfully during the summer holidays. Sadly, the mother yeast I’d acquired from E5 Bakery in Hackney had to be abandoned, since it wouldn’t really have survived the overland trip from London to Singapore. (It would also have been difficult to explain to Dutch, Danish, Swede, Latvian, Russian, Mongolian, Chinese, Vietnamese, Cambodian, Thai, Malaysian, Singaporean customs that I had my mother in a tub and the white powder was for feeding her/it.)

Hearing of Woodlands Sourdough‘s bread subscription service!, therefore, seemed a godsend. And at S$5-S$7 (£2.50 – £3.50) a loaf/boule, quite reasonably priced. 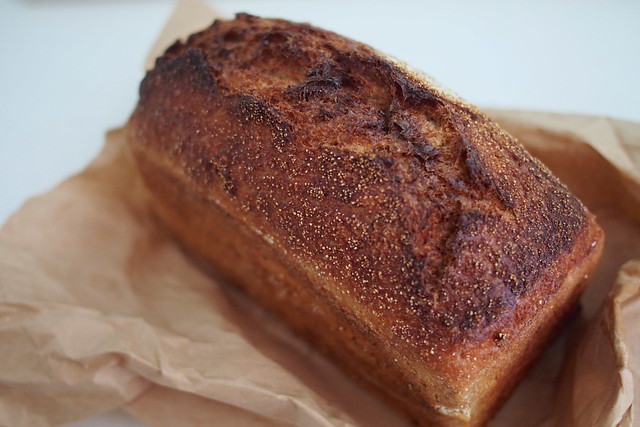 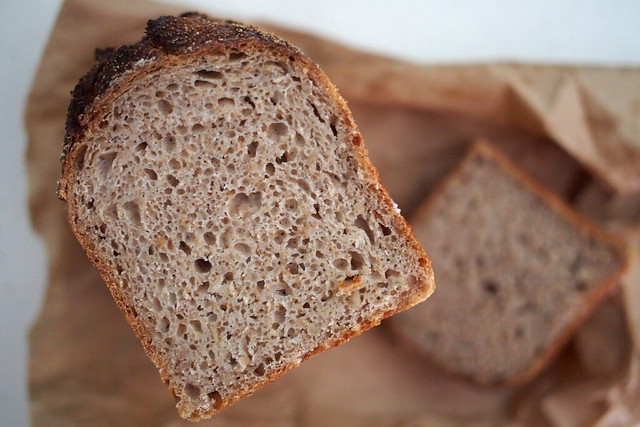 Coming home from work to a loaf or boule of this each week made the next day’s breakfast something to look forward to. Left in its brown paper bag overnight, the heady yeasty wholesome smell of the bread would have filled the kitchen, beckoning the office-bound with its siren call. 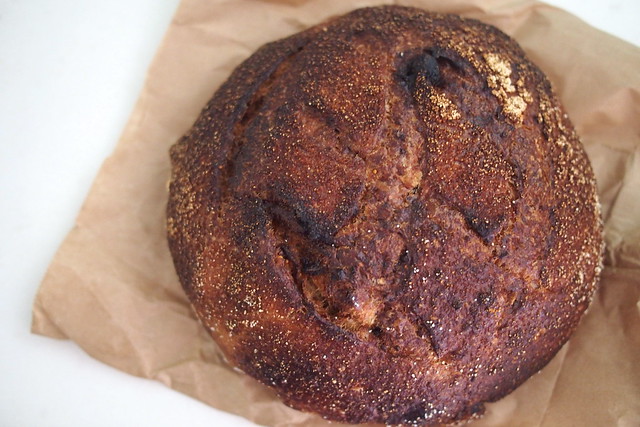 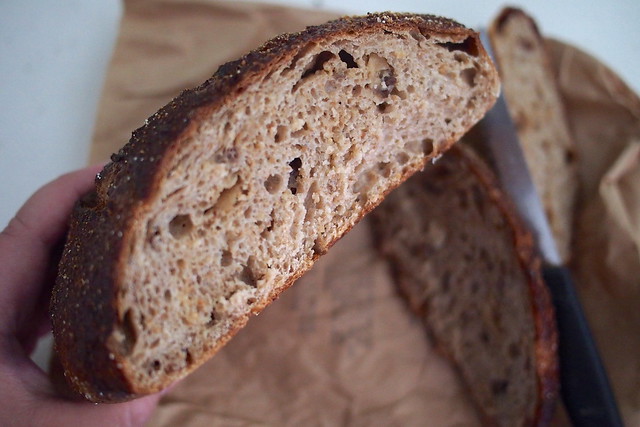 The morning after the first delivery, it took quite a bit of self-control not to nom on a slice half-dressed with my shirt tail hanging out.

Reports wax lyrical about sourdough’s suitability for coeliacs, even though it isn’t technically gluten-free. Something to do with the long slow fermentation process. But I wouldn’t know anything about that. As far as I am concerned, it makes killer Smörgåsbord-ish open-faced toast.

Below: variations on a theme of avocado – plain, with bakwa bits, with Chilean blueberries and Korean strawberries, with Italian prosciutto, with British bacon and mozarella pearls. 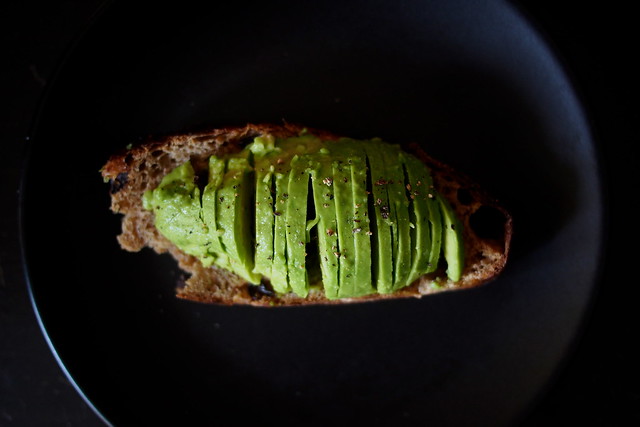 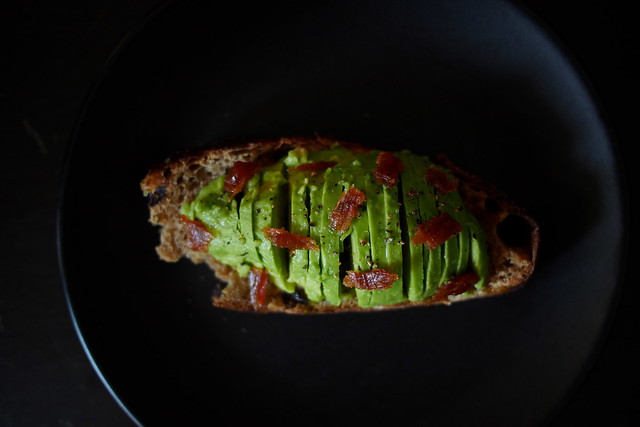 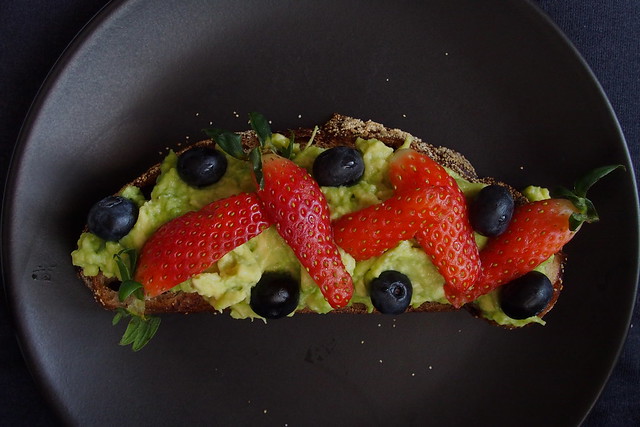 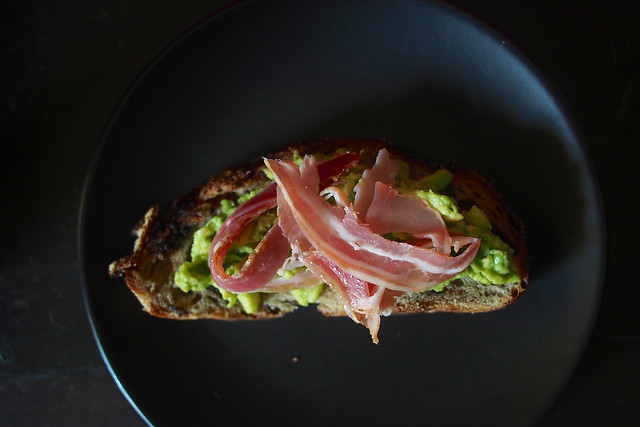 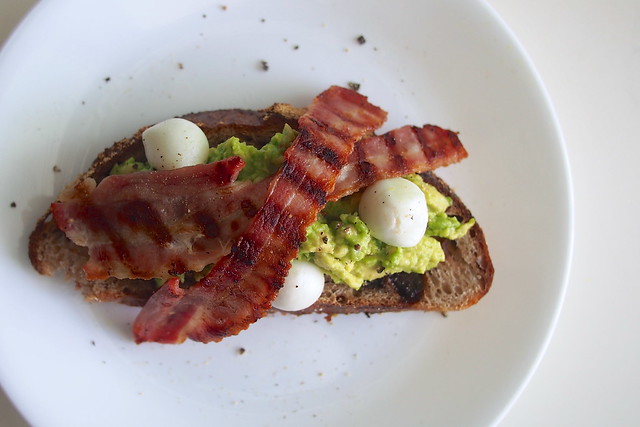 I’ve been thinking, while happily chowing down on a sourdough slice, of Jesus’ declaration in the Gospel of John: “I am the bread of life; whoever comes to me shall not hunger, and whoever believes in me shall never thirst” (John 6:35).

If this bread just fills me up, buttercup, how much more soul-satisfying it is to trust him who created the universe and who died so that we can rest, knowing that our sins will not be counted to us on the Last Day.

With that Bread, we can truly sleep soundly at night.