Having just settled in Singapore for the long haul, I was impressed by the nimble efficiency with which so many parts of the Singapore government rolled out measures and made the requisite announcements (because silence from authorities = bad) about them, all pointing to much forward-looking contingency planning.

Today, since there was a probability of PSI being at hazardous levels, Ministry of Education made the decision to close primary and secondary schools and postpone Singapore-Cambridge ‘O’ level examinations. Yet, it had the forethought to keep the premises open:”parents who are unable to make alternative care arrangements can continue to send their children to school. Teachers will continue to report for duty, and students will be placed in suitable facilities such as libraries and enclosed spaces…school-based student care centres will remain open.” 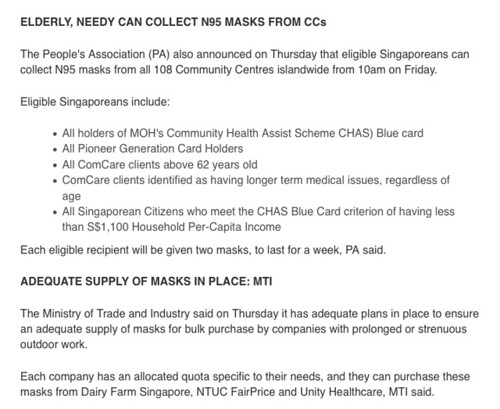 The People’s Association made available N95 masks for the elderly and needy at community centres, also distributing them and other essentials to the vulnerable and possibly housebound. And the Ministry of Trade and Industry ensured a sufficient stockpile of masks for companies. 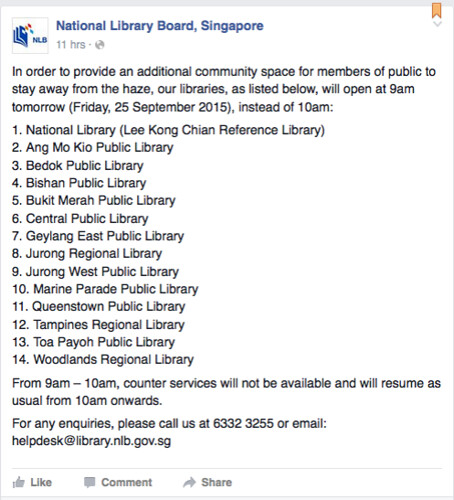 National Library branches opened an hour earlier to provide a community space for people wanting to stay out of the haze. Bravo, library staff!

The National Environment Agency continued to publish 1-hour, 3-hour, and 24-hour PSI readings, together with simple explanations of how to use these readings. And the Health Promotion Board had good write-ups on how to wear N95 masks.

Yet, you get Ugly Singaporeans complaining that there is no national work shutdown and also they want the government to pay for their utilities for staying at home. I thought it was a joke at first but the vitriol suggested otherwise. How exactly they expect to get their groceries, water, public transportation, security (from external threats and internal threats), wages, and money for doing nothing etc, I did not know; the complexity of the situation was swept aside in favour of their selfish greed.

But let us think about what can possibly be done about the source of the problem – the Indonesian forest fires. Of course, the transboundary haze has been going on for decades.

Here are some of the not-very-well-thought-through suggestions (or rather, going by the tone, demands) going round:

The best that can be done, is alot of diplomacy and invoking of laws including the Transboundary Haze Pollution Act.

It doesn’t seem much.

But perhaps then, this is a good time to understand our place in Singapore society, and Singapore’s place in the region and the world, and the whole of humanity’s place in the workings of the earth. No human can command the wind not to blow and the rain to fall, at will, in a certain place.

35 On that day, when evening had come, he said to them, “Let us go across to the other side.” 36 And leaving the crowd, they took him with them in the boat, just as he was. And other boats were with him. 37 And a great windstorm arose, and the waves were breaking into the boat, so that the boat was already filling. 38 But he was in the stern, asleep on the cushion. And they woke him and said to him, “Teacher, do you not care that we are perishing?” 39 And he awoke and rebuked the wind and said to the sea, “Peace! Be still!” And the wind ceased, and there was a great calm. 40 He said to them, “Why are you so afraid? Have you still no faith?” 41 And they were filled with great fear and said to one another, “Who then is this, that even the wind and the sea obey him?” (Mark 4:35-41)