One of my holiday rituals is to re-read Neil Gaiman. While in school, I used to spend precious pocket-money at Comics Mart at Serene Centre (10 Jalan Serene) on the latest Vertigo installment of The Sandman when it finally arrived in Singapore. Later, there were short stories and novels to enjoy, and then, as a testimony to the popularity of the series, hardback compilations of The Sandman.

He was in Singapore once many years ago but I got there too late and wasn’t let in the queue. Then he was in London and I got tickets for a reading of Fortunately, The Milk, but something intervened and I had to give that up as well. 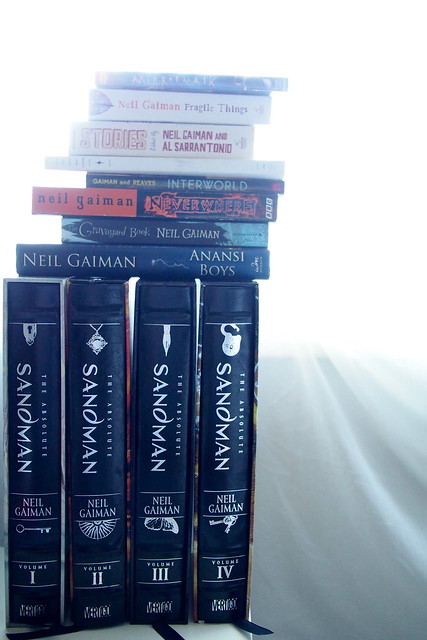 Meanwhile, thought I’d make a messy list, for myself, of much of what is delightful about Gaiman’s work. Much that follows are quotes from Gaiman, since being a fairly well-thought-out self-aware character, Neil Gaiman best explains Neil Gaiman. Transportation theory, sleeper effect much?

1. mega-metafiction
He invents cosmologies by the truckload-ful. What’s captivating about them (vs., say, the impressive Lord of the Rings or the Marvel universe) is that Gaiman’s worlds are a mash-up of current everyday reality, well-known fairy tales, a smattering of old myths from different cultures around the world, all woven skilfully into a coherent whole.

2. only ordinary protagonists in extraordinary situations
What makes his stories enchanting is that his protagonists are perfectly ordinary people going about their daily lives, not quite looking for trouble; this is life as we know it and live it – taking the tube to work, rummaging through the charity shop. Then another reality intrudes on it – the denizens of London Below, Norse gods, anthropomorphic personifications of ideas, King Arthur’s knights, fatherly vampires, characters from seamen’s tales, etc. And if it could happen to them…

In his fictional worlds, reality is frequently subject to disturbing or hilarious slippage: A moonlight stroll in search of a defunct local attraction shifts without warning into a Shirley Jackson-style murderous ritual (“A Lunar Labyrinth”); a talkative woman in a small-town pub turns out to be a spectral jilted lover with a gruesome secret to reveal (in “Black Dog,” a new adventure of Shadow Moon, the hero of “American Gods”); a teenage girl’s addiction to tanning lotion may result in the creation of a shimmering orange entity known as “Her Immanence,” or to her sister as “the Great Oompa-Loompa.” (That story, “Orange,” is skillfully constructed as a litany of unsatisfying answers to official questions.) (Neil Gaiman’s ‘Trigger Warning’, Andrew O’Hehir for The New York Times)

Fiddler’s Green (“Gilbert”) from The Sandman series always seemed to me to resemble G.K. Chesterton. And in all probability, it/he was a homage to that great writer:

“…G. K. Chesterton[‘s] work, Gaiman says, “left me with an idea of London as this wonderful, mythical, magical place, which became the way I saw the world.” (Kid Goth, Dana Goodyear for The New Yorker)

He takes loads of familiar childhood fears and forces us to see them through to the end: being taken away by other malevolent parents, losing our parents, monsters in the dark and under the bed and under the bridge…

…this being TED, Gaiman took a few minutes first to chew on the question: Why do we tell scary stories? He sees them as filling a vital role in our lives.

“Ghost stories are a very peculiar tradition. They’re one of the three different kinds of stories that human beings tell each other that you find out if it’s working physiologically. If your flesh is creeping and you’re starting to feel uncomfortable, the story is working,” says Gaiman. “As long as human beings have been telling each other stories, they’ve been telling each other really scary stories. They’d be sitting there in the cave with the fire burning, and they’d tell each other about the things that were even more scary than the things they normally encountered out there.”

For him, the purpose of horror stories crystallized from the reaction young women have to his book Coraline, which he calls “a very scary book for little kids, intentionally.”…To this day, Gaiman often meets women who tell him that Coraline helped them through their darkest times.

“That’s what it’s for. It’s there because a little bit of fear in a safe place is like being inoculated,” says Gaiman. “It gives you something you can go through and be sure that you’ll come out the other end. It teaches you to be brave.” (Neil Gaiman tells ghost stories late in the night at TED2014)

4. morality tales
But the denouement of his stories are almost always comforting – the protagonist’s bravery is rewarded, and the nasty, self-centred, wicked people are punished or get their just deserts.

Gaiman says that, especially in the early stages of his career, “I was very, very good at taking a voice that already existed and just parodying it.” He describes his short piece “We Can Get Them for You Wholesale” as him doing John Collier. “A Study in Emerald” is his version of Sherlock Holmes, by way of H. P. Lovecraft. The writer Gene Wolfe says that “Sunbird,” Gaiman’s story about an epicurean club that eats the mythical phoenix, “is so much in the style of R. A. Lafferty it’s almost as if Lafferty were dictating it from Heaven.” (Kid Goth, Dana Goodyear for The New Yorker) 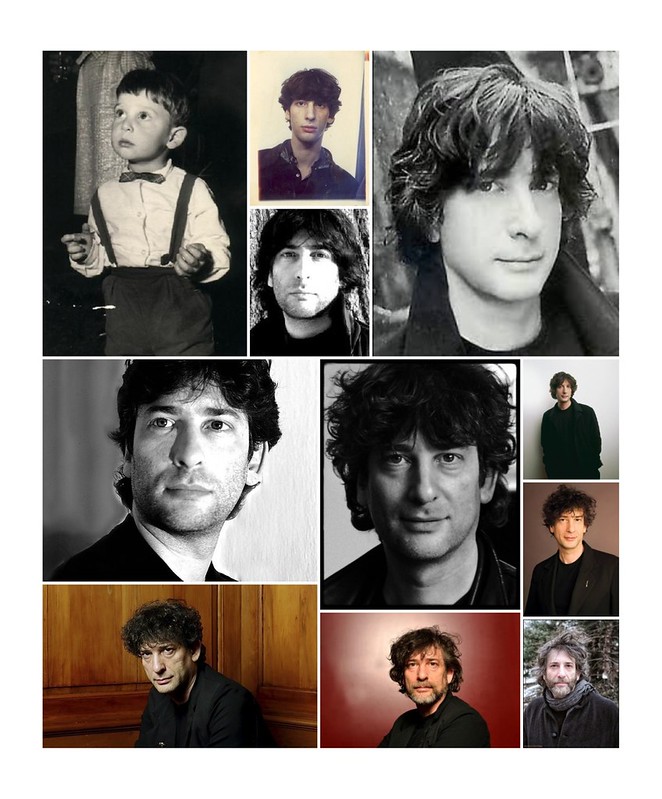 How does he do it? What’s his process?

In the early eighties, he started going to fantasy conventions as a journalist and interviewing authors he admired. At one such event, he met Alan Moore, who, through “Swamp Thing,” was transforming the comic book into something literary, psychological, and self-aware. He asked Moore to show him how to write a script; they sat down and Moore sketched it out in a notebook: page one, panel one, FX for sound effects, and so on. Moore’s style shaped Gaiman’s early work; his scripts were fully realized texts, dense with visual information. Gaiman says that an Alan Moore script for a twenty-four-page comic would be about a hundred pages, his own would run to fifty pages, and most other writers’ would be half that. (Kid Goth, Dana Goodyear for The New Yorker)

The biggest way my writing habits have changed over the years is I’m no longer nocturnal. In the old days, I would tend to write when everything else that could be done had been done. I’d start around 8pm and work industriously until around 5am. Then, somewhere in the early ’90s, I gave up smoking and that made a difference. Without cigarettes, if I tried doing that I just fell asleep at the keyboard with nothing to show for my efforts but 500 pages of the letter ‘M’. At that stage, I became more diurnal. I think it was having kids; getting older, too.

But now that I am older, I get to indulge myself in ways of making the world quieter which weren’t available to me when I was a young writer. I can rent a little cabin where there’s no cellphone signal or internet and nothing to do except stare at a nearby lake… or write. When I’m pushed, I will borrow houses from friends, occasionally vanish off to a cheap hotel room for a week or two to get my head down and move into that peculiar universe where you know you have stuff to finish and you do nothing but write. You go to sleep with the story bubbling in your head and when you wake up you reach for a notebook.

For screenplays, I work directly on screen – novels I write in longhand. For novels, I like the whole first and second draft feeling, and the act of making paper dirty, whereas, for screenplays, I value the immediacy of a computer. I’ve often thought, when I’m writing a screenplay where I’m six drafts down the line with loads of notes and inputs, that it’s interesting to read the first draft again. Often you realise it was more alive, so you go back and take stuff out of it.

I try to change my superstitions with each project. Working in fountain pen is good because it slows me down just enough to keep my handwriting legible. Often I use two pens with different coloured ink, so I can tell visually how much I did each day. A good day is defined by anything more than 1,500 words of comfortable, easy writing that I figure I’m probably going to use most of in the end. Occasionally, you have those magical days when you look up and you’ve done 4,000 words, but they’re more than balanced out by those evil days where you manage 150 words you know you’ll be throwing away. (Neil Gaiman: How I Write, in interviewed with John O’Connell for Time Out magazine)